DETROIT (FOX 2) - Some photographs were just released from atop the Ambassador Bridge between Detroit and Windsor. But as stunning as they may be - they're also illegal.

The photographer, who calls himself Drift, says the climb to the tip of the Ambassador Bridge as wonderful - and tiring, and he's revealed to FOX 2 why his climbs are worth the risk of getting caught.

Ambassador Bridge photographer says free climbs are therapeutic for him

As an illegal climb and photographs atop the Ambassador Bridge are being investigated, the man called Drift behind the photos is speaking out about his hobby.

The photos were released this week without many details, but Drift is saying he did the 386-foot climb was with no rope or harness.

"I won't speak on how or when, or any of those things. The bridge is secure; they do a very good job of securing it," he said. "That night I was the only one there. I took all my shots via tripod, self-portraits." 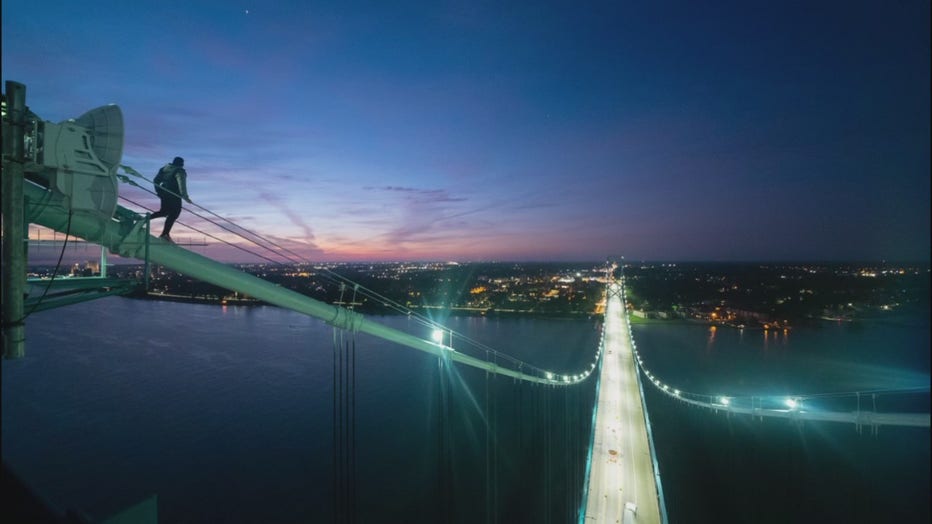 The photos surfaced exactly one year after Windsor musician Luke Heney made his climb, going unnoticed for three hours. Drift says he has no connection to the musician, who was later charged.

Drift is part of a community that does illegal climbs and exploration all over the world.

"In this post-9/11 world, it is very hard to do some of those things that we do. And we know this and we still take the risks."

U.S. Customs and Border Protection is aware of the photos but can't say when they were taken. We're told they were taken in an area secured by The Ambassador Bridge Company. They're all working together to investigate.

Drift says he is an Army veteran and climbed during his time in the service, but it was a 1,000-foot climb in New York that got him hooked.

"Picked up a camera started shooting and started climbing and it was therapeutic for me. It's never been an adrenaline rush thing." He says it helps him cope with PTSD - and has no intent on stopping.

"We take the risks because we love what we do. We love sharing art with the world that the world may never, ever see."