MICHIGAN - Compared to the rest of the world, 2019 brought relatively moderate temperatures to Michigan.

Despite the Earth recording the second-warmest year on record, last year ranked 69 out of 125 for the highest average temperature in Michigan.

"The warming has leveled off in the last 10-20 years for the Great Lakes region," said State Climatologist Jeff Andresen. "It is warmer now than it has been in the past, but there has been a leveling off since around 2000."

Even so, the state did set another historic record: the amount of rain and snow that fell.

"There's been a very distinct unmistakable trend toward more precipitation," said State Climatologist Jeff Andresen. "It's been the wettest since 1895 when the NCEI really has usable data."

The NCEI, or National Centers for Environment and Information, reports 41.55 inches of precipitation fell in Michigan in 2019. Andresen said that's more than 10 inches above normal. 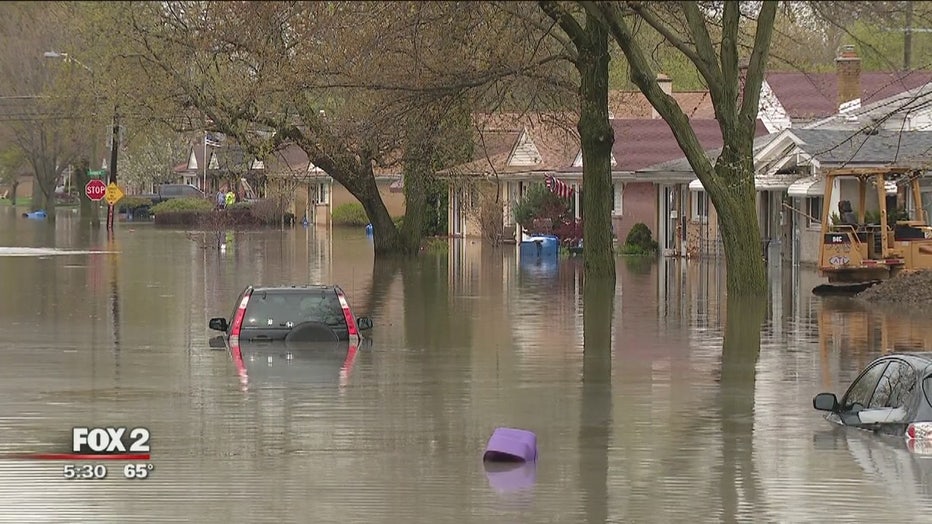 Detroit residents will recall one of these high-precipitation events on May 1, 2019, when enough rain fell to deluge Oakland County and catalyze a state of emergency. In another high-precipitation event on the west side of the state, a 24-hour rainfall record was set when almost 13 inches fell on Fountain, Michigan. The previous record for a full day of precipitation falling was 9.78 inches.

Another potential record may have been broken in Mason County, but gauge that measured rainfall broke.

Many of these high precipitation events are occurring more in the winter and spring, which mimic the changing weather patterns seen during those seasons. While Michigan's temperatures have leveled off somewhat in recent years, minimum temperatures have risen more quickly than daytime maximum readings.

"There's some seasonality of the precipitation changes similar to temperatures, with more increases (in precipitation) in cold seasons, especially in the winter and spring," Andresen said. "There have been increases in the summer, but less in magnitude."

RELATED: Great Lakes water levels could be even higher in 2020

So what's pushing these more frequent extremes in precipitation? Scientists aren't entirely sure, but it may have something to do with an increase in Jetstream patterns over the region, which leads to both more movement of water vapor from subtropical source regions and to more low-pressure systems carrying precipitation. And scientists are predicting more warmer and wetter weather in Michigan's future.

"I'm not aware of anybody that has any good answers. The Jetstream and the flow of that is such an important factor, but we don't know exactly how its behavior might change over time," added Andresen.

What scientists can say for sure are warmer atmospheres hold more water vapor. That means with a climate continuing to warm, there's more potential for weather events to bring even heavier precipitation events.

What also is certain are the effects these events are having on the state. An increase in rain won't just drive flooding inland in Michigan but also drive up water levels in the Great Lakes. The two factors that primarily influence lake levels are precipitation and ice cover.

After a record-breaking year that saw most Great Lakes record new highs, the U.S. Army Corps of Engineers is estimating the region could be in for more of the same in 2020. Six-month projections are estimating Lakes Michigan and Huron will break records in the spring.