DETROIT - With water levels in the Great Lakes breaking records in 2019, the U.S. Army Corps of Engineers is predicting levels to reach similar heights in 2020, with a chance of new records being set again.

Projections that extend six months from the present-day estimate levels in every Great Lake, as well as Lake St. Clair will be well above the average levels, with Lakes Michigan and Huron appear the most likely to set record highs. Both came close to records in 2019.

“Great Lakes have a long memory and it takes a while for lakes to respond,” said Lauren Fry, the technical lead for Great Lakes hydrology at the U.S. Army Corps of Engineers. “Looking at where we are now going into the future, it will take an extended period of very dry conditions to bring us back to the average.”

While it’s unclear how long it will be before water levels do return to normal, the Army Corps is confident even if this year experiences its driest year ever measured, the Great Lakes will still be above the average.

While projections become less certain the further into the future people look, the outlook for the winter and spring will likely be wet, not dry. Layered on top of an already historic season of high lake levels in 2019 that measured new records in Lakes St. Clair, Erie, Ontario, and Superior, it’s likely Great Lakes residents will see more of the same in 2020. 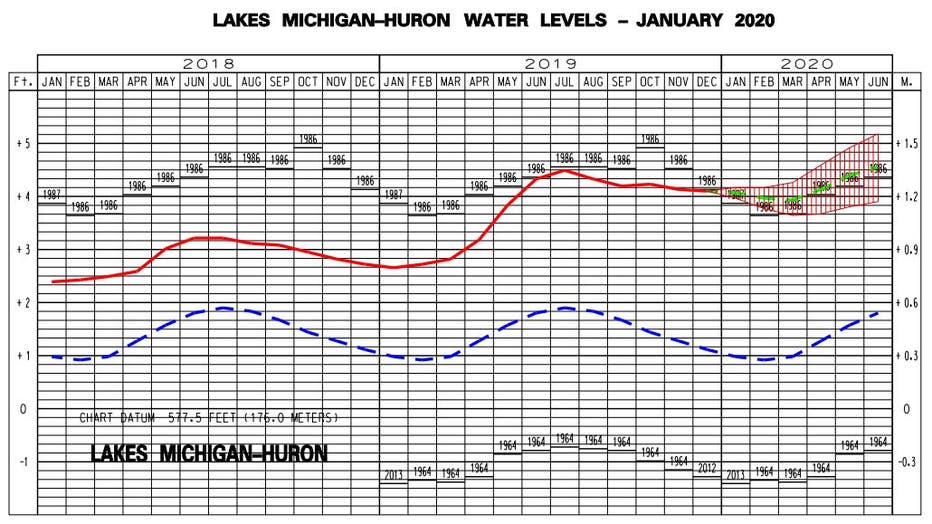 Officials are predicting Lakes Huron and Michigan will surpass record levels set in 1986. The red line represents measured lake heights in past years. The blue line represents the average recorded heights of the lake over time. The green line represe (U.S. Army Corps of Engineers)

The last time lake levels were this high was in 1986 when Fry said there was a “really big fall precipitation.”

Besides precipitation, evaporation on the lakes are the two primary factors that determine lake levels. Since the lakes recorded historic lows 10 years ago, the region has seen consistent ice cover matched with heavy rainfall and snowmelt.

“By my read, what’s changing are the extremes. The fact is it’s gone from more than a decade of at or around record lows in 2010, then jumping up to record highs so quickly - it’s unusual,” said Joel Brammeier, CEO of the Alliance for Great Lakes. “That volatility (shows) we’re seeing potentially global climate change coming to the Great Lakes.”

In 2019, water levels in Lakes Michigan and Huron came close to breaking records in June and July, when levels rose two feet above average recorded measurements. Lake St. Clair also reached its high in July, extending multiple inches above the 1986 record and more than two feet above the norm. 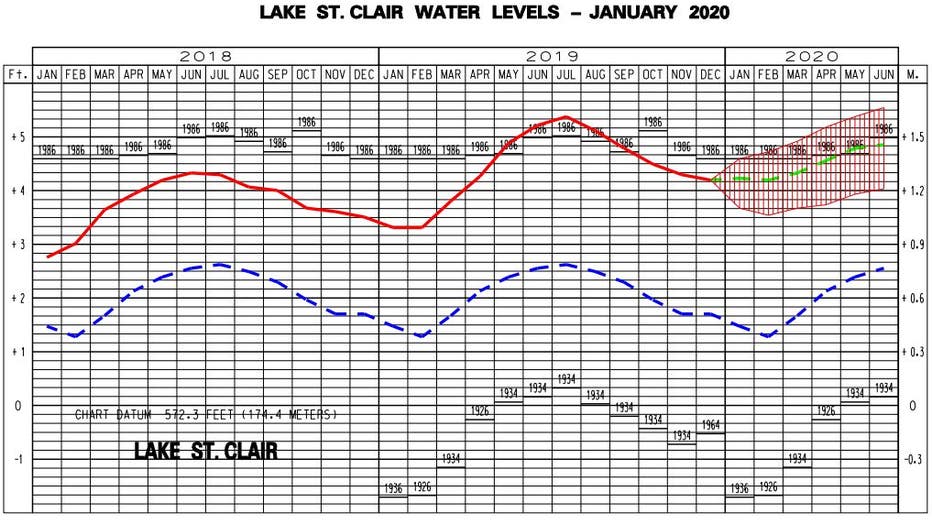 After surpassing record water levels in 2019, Lake St. Clair is expected to reach similar heights in 2020. The red line represents measured lake heights in past years. The blue line represents the average recorded heights of the lake over time. The g (U.S. Army Corps of Engineers)

The past few years have been particularly wet for residents in the region. Just in 2019, every Great Lake beside Lake Superior received higher than average precipitation. Fry said 2015-19 has been the region’s wettest five-year-period in recorded history in the Great Lakes. Last May, 23 of the month’s 31 days saw rain, above the average measured by the National Weather Service.

When that volatility arrived in Michigan, it wreaked havoc on coastal communities around the state. The Detroit River, which connects Lake St. Clair to Lake Erie, spilled into the city and inundated neighborhoods like Jefferson Chalmers with high water levels. Parts of Harrison Township, which sits just west of Lake St. Clair, became impassable after its roads channeled water that spilled over from the basin.

Docks in St. Clair Shores became submerged and kept people from accessing their boats. Even the annual Jobbie Nooner was disrupted by the lake levels.

In response to the high lake levels, Michigan’s Department of Environment, Great Lakes and Energy sped up the time it takes for residents to acquire a seawall permit. Several communities have also requested Gov. Gretchen Whitmer to declare a state of emergency, in hopes of acquiring enough money to mitigate future-damage the levels might cause.

Ten state lawmakers mailed a letter to the governor in early December requesting the declaration. However, at the time Whitmer’s administration said the Michigan State Police, which works with emergency response teams, has yet to receive a request from county executives.