DETROIT - Sure going south for some spring break sun would be nice this time of year, but Joey Maniaci has other things on his mind.

He's shadowing a Henry Ford cardiothoracic surgeon in hopes of someday taking on the role himself.

"I've spent all week here so far instead of on a beach in Mexico or something like that," he said. "It's been awesome."

Maniaci and Hassan Nemeh, the director of the heart and lung transplant at Henry Ford Hospital, might be spending mid-March walking the halls of the hospital together, but their relationship goes back years.

More than surgeon and student, more than mentor and mentee, Nemeh in many ways is the reason Maniaci is alive.

"He and I have a special bond because I took care of him as a patient four years ago when he presented with acute heart failure," Nemeh said.

Instead of spending his spring break on the beach, Joey Maniaci is spending it shadowing a Henry Ford Hospital physician in hopes of becoming a doctor himself one day. The doctor he's following around is the same man who helped save his life when Maniaci was diagnosed with acute heart failure

When Maniaci started his junior year at the University of Michigan, he was enjoying the traditional welcome week that all undergraduates partake in. Except one morning he woke up not feeling right.

"I woke up after welcome week and said 'I don't feel good'," he said. "Shortness of breath, very tired, lethargic - got to the point where I actually took myself to the emergency room."

The symptoms persisted to the point that Maniaci thought he was dying. A virus had attacked his heart.

"That's the last thing on my mind - is heart failure. At this point, I lost it," he said. "I'm 20 years old - not one thinks that's going to happen - and we really didn't know where to go from there."

Maniaci was transferred to the Henry Ford Hospital and was seen by a team of heart specialists.

"The lungs failed, the kidney's failed, the liver was starting to fail," Nemeh said. "There was no chance of surviving without the support - it was a matter of minutes."

For a week, Maniaci was on ECMO, meaning he had a machine doing the work of his heart and lungs. Then, a device called the LVAD was implanted in his chest - essentially a pump doing the work that his left ventricle can't do.

"For him, his best course of action was to support his left ventricle - with the hope that this would allow us to reverse him being on a ventilator, reverse the kidney failure because he was on dialysis at the time, reverse the liver dysfunction," said Nemeh.

It worked and the LVAD put in Maniaci's chest continues to keep him alive today. Now a grad student preparing to take the MCAT and go to medical school, Maniaci's journey represents one of success. But it's not over yet - he needs a heart and has been moved to the transplant list.

"I don't really want to have another major surgery, but at the end of the day, it's the best plan for me at this moment," said Maniaci. 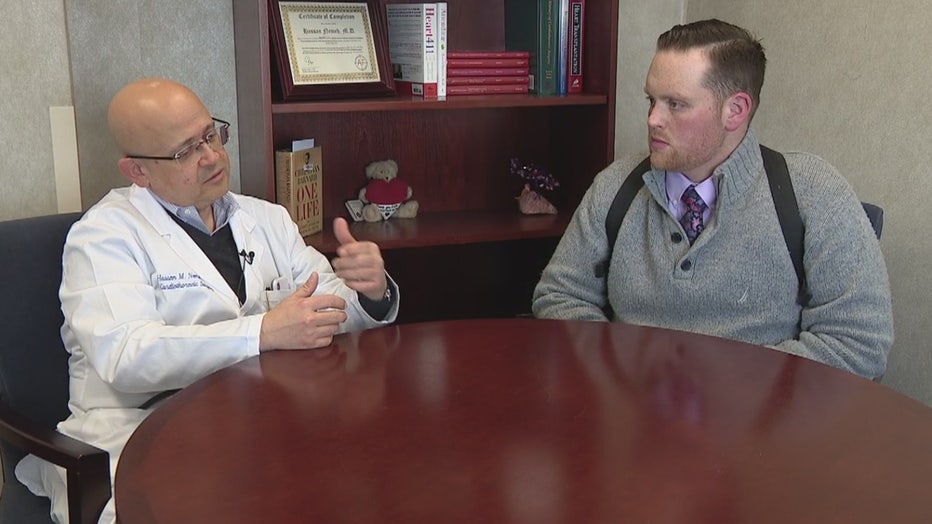 As a patient, Maniaci says his own experience will help make him the kind of physician he aspires to be.

"I'm absolutely honored that he's inspired by the work we do - and at the same time I feel almost like a proud parent," said Nemeh.

"It motivates me to want to be in their place one day - to make a difference for someone like me - yes," Maniaci said. "I think the biggest thing is I hope to have an impact on somebody like Dr. Nemeh has had on me. The lessons that I've learned both from being in the hospital and this week with Dr. Nemeh will take me very far."