Novi, Walled Lake, and Commerce Township are all telling their residents to boil their water as a precaution following a loss of pressure due to a massive water main break in Oakland County on Sunday.

Regulators reported a 48-inch break in a water main at 14 Mile and Drake Road early Sunday evening. Novi, Commerce Township, and Walled Lake have all told their residents they should boil water for at least a minute before drinking.

As of Monday morning, officials from GLWA and other contractors are at the break site. They're "working to isolate the remaining sections of pipe to stop water flow from the break and allow excavation to begin," said a release from the GLWA.

In addition to the boil water advisories, schools in Novi and Walled Lake are both closed Monday due to the breakage.

"Alert: No school in Novi Community School District Monday, November 1 because of a water main break in the city of Novi. Eat your candy and save some for me!" tweeted the district's superintendent.

The break in a transmission main was reported around 5:15 p.m. Sunday. It sent a spout of water spraying several feet high into the woods. Video shows a geyser of water erupting from the side of an embankment beneath a road.

According to the GLWA, the agency isn't concerned about a regional water pressure drop in the system. They did advise communities to be aware of a potential drop in pressure among local municipalities.

During the next few days, affected communities will continue to have water flow, the GLWA says. "However, it may be at a lower level than normal."

Boil advisories are typically advised because a drop in water pressure can lead to bacterial contamination in pipes. The water should be boiled for at least one minute. 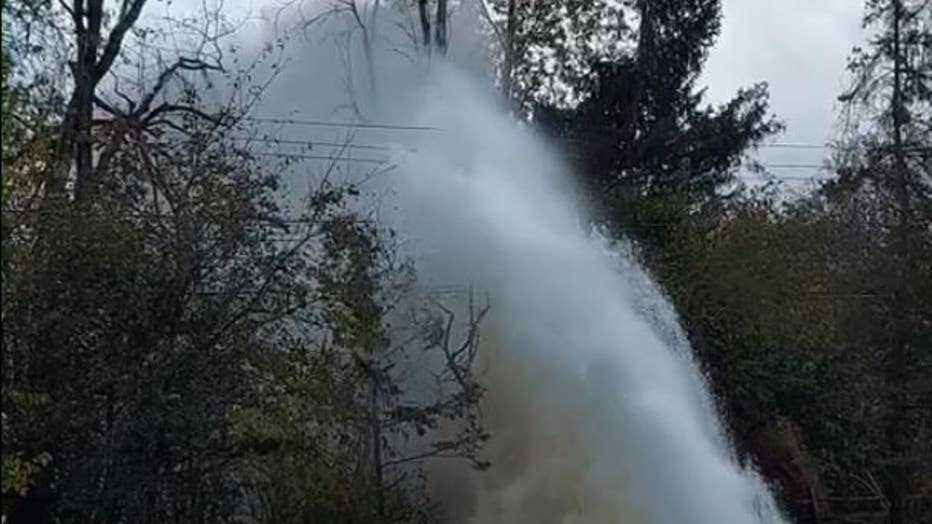