PLYMOUTH TWP., Mich. (FOX 2) - For the second time in a month a brawl broke out at a high school game - but this time it was hockey.

It took place between Bloomfield Hills Brother Rice and Novi Catholic Central at the US Hockey Arena in Plymouth.

An investigation is underway after Catholic high school students duked it out after a hockey game. Fight Central TV reposted the brawl video on Twitter, which was originally recorded by a Collin Babcock social media account.

It went down in the parking lot of the arena Dec. 7 after the schools faced off for the Catholic High School League championship. But as bad as the video looks, no one was seriously hurt.

"This is completely unacceptable. In today's environment especially with things that can get out of hand so quickly there has to be penalties doled out so they take it seriously," said Wolf Mueller, an attorney and Catholic Central parent.

His son won two state championships with the football team and says the rivalry between Catholic Central and Brother Rice is one of, if not the biggest in Michigan.

And while it's unclear if that was at the heart of the brawl, people we talked with cannot rule it out.

"I think the kids should be suspended whoever were involved, especially the people who started it," Mueller said. "As far as criminal charges I hope nothing happens like that."

And it has both schools in contact with CHSL, cooperating with its investigation. The Catholic High School League released a statement saying in part:

"This unfortunate incident does not reflect the Catholic values upheld by both schools and the CHSL community at-large. The schools agree that students found to have engaged in wrongdoing will be disciplined accordingly, up to and including expulsion." 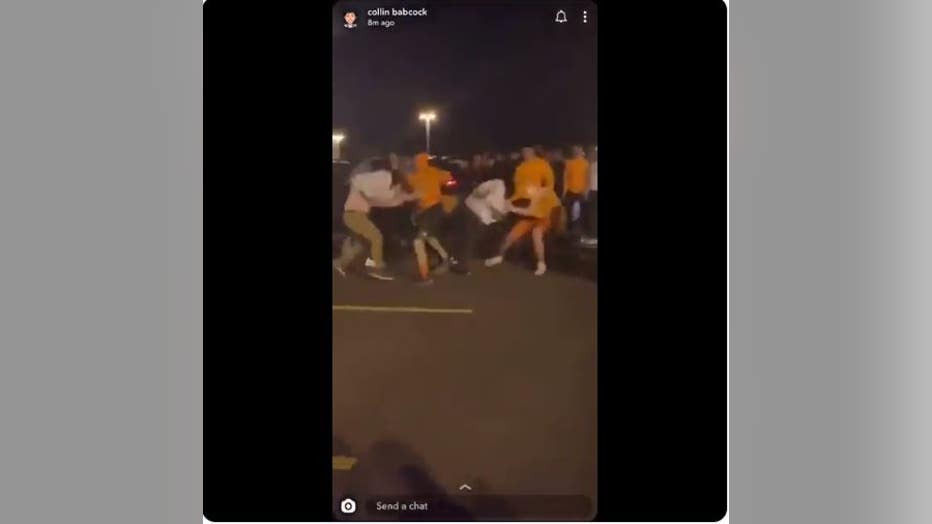 Screenshot of Fight Central TV's repost of the brawl video on Twitter, which was originally recorded by a Collin Babcock social media account.

FOX 2 caught up with Brother Rice alum and former Lions offensive lineman TJ Lang for his take on the brawl and how school and sports rivalries can at times bring out the worst in people.

"I know the guys from Brother Rice and probably Catholic Central are both equally ashamed of what happened," he said. "It's different with the fan base, it is different with the students, it's different for some of the alums because they've never been in the heat of the battle to say we can go beat each other up for 40 or 60 minutes and then after the game you shake each other's hands," Lang said. "I think sometimes from the fans and from the students we see them riled up and emotionally invested in the game from sitting there, being on the fanatical side of it."

Plymouth Township police also investigating they want any witnesses to that fight to come forward.

"We are aware of the incident after a hockey game in Plymouth during which two of our students were attacked by a group of individuals who do not attend our school. We are grateful to God that no one was seriously injured, and out of respect for the privacy of our students we do not have any further comment at this time."

"Brother Rice High School is working with The Detroit Catholic League to address a physical altercation between students following the December 7th hockey game. We expect all students to follow our code of conduct policies while attending school events. The safety of all students and attendees is our highest priority at every athletic event. To respect and maintain student privacy, we are not able to provide further details at this point."