"On behalf of Buddy's, I'm happy to present this check for $11,000 -- our proceeds from opening day -- to support your community projects," said Buddy's CEO Burton Heiss.

Buddy's Pizza has contributed thousands of its opening day proceeds from its new downtown Detroit location to the Motown Museum.

In December, the 74-year-old Detroit brand celebrated its opening day downtown Detroit. Tuesday's donation will benefit the museum and its community programs.

"What Buddy's has done today by presenting this gift is really supporting all the young people who will come through that new space when it opens," said Robin Terry, chairman, and CEO of the Motown Museum.

"This is hometown talent in their own backyard and it's being cultivated through the museum with partners like Buddy's. It's what we're here to do," said Paul Barker, director of development and community activation with the museum.

The Motown Museum founded in 1985 is on West Grand Blvd -- Hitsville U.S.A. is where Motown all began in 1959. People from all over the world come to tour the museum. One of the most popular things to do is stand in Studio A, where Motown stars recorded songs that are still popular to this day. 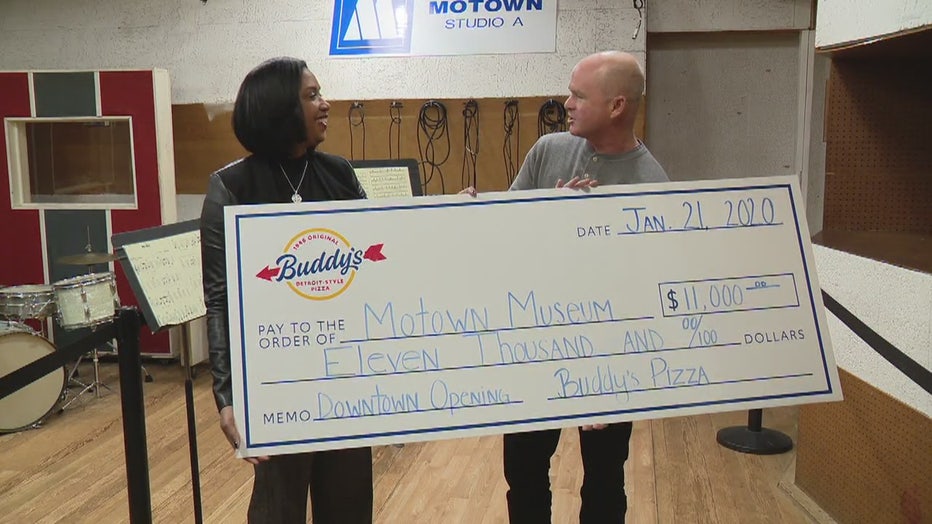 Fundraising efforts for the Motown Musuem are off to a strong start in 2020. The Vera and Joseph Dresner Foundation have awarded a $1 million grant. That money will be used to support Hitsville Next, the museum's creative hub for entrepreneurship