Calder eggnog - get it while you can!

Calder eggnog is possibly the best eggnog that you haven't had the privelege of trying yet. They let us inside the factory to see exactly how the delicious treat is made.

LINCOLN PARK, Mich. (FOX 2) - 'Tis the season to be jolly the season for eggnog. And you will probably never find a better eggnog than Calder's Eggnog made my Calder Dairy.

The uniquely Michigan eggnog is considered by many to be the best out there. Just ask Alyssa Prawdzik. Now, she may be a bit biased - she IS the office manager at Calder Dairy - but Derek Kevra* is impartial, and he agrees!

"I always tell people, if you like eggnog, don't try ours, because you'll never be able to try anything else," Prawdzik said. "There is literally no other egg nog like ours."

The unique Michigan dairy still has milk men who do home delivery.

"We legit still have milk men, so we have 20 routes," Prawdzik said.

The Carleton farm has 150 cows and the bottling plant is in Lincoln Park. It's 6,000 gallons and gets pumped into the plant where it's pasteurized and bottled in glass bottles.

"We've kept up with them because we know it's important. It's better for the environment and milk just tastes better in a glass bottle," Prawdzik said

*Ok, maybe Derek is slightly partial - he is a self-described huge Calder fan - and he got to see the magic happen.

But we're here for this year's eggnog - and it comes in a special holiday glass bottle.

"It's super limited edition, this year is super cool because it's our 75 anniversary so the backside has a thank you to our customers because we wouldn't be here without them," Prawdzik said.

That's three-quarters of a century in Michigan - doing things the old-fashioned way.

"There were like 150 dairies back in the day. There's maybe a handful of them left, so we're just super grateful that we get to be one of those," Prawdzik said.

So what's the secret? Well, they're not telling us.

If you want to buy a bottle or ten, Meijer or Kroger won't be the place to go for the delightful treat. You'll need to check out their website to find a grocery store that carries it near you. 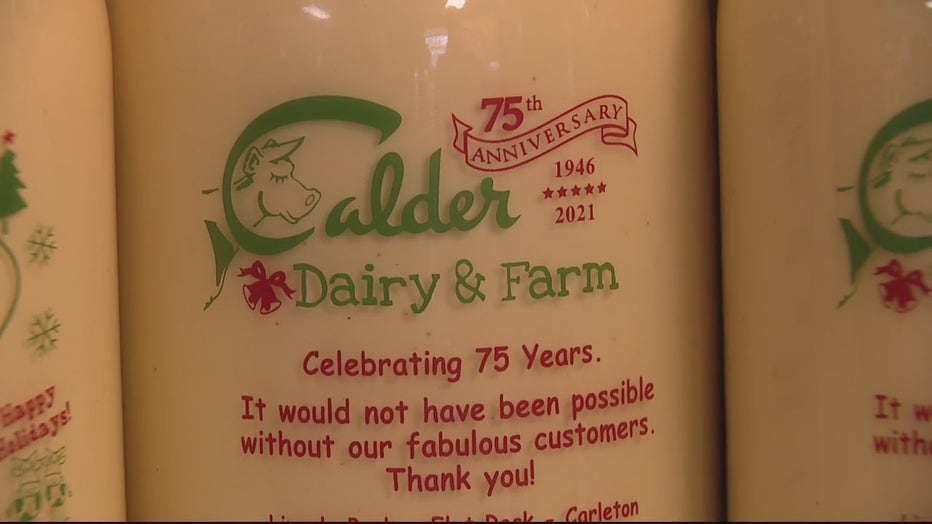