FOX 2 - Some customers of a concrete company say -- they are sinking fast. Bad work.  Delayed work.  No work at all.

Those are just some of their complaints. Many of their customers who talked to us have paid in the thousands.

Ultra Concrete blockheads are in the Hall of Shame

There are two main guys running the show here.  One is an ultra-flashy salesman.  The other, an ultra-mysterious dude who hides behind a mask.  But they have one thing in common.  Their customers say they're both cold-hearted creeps.

This is 'Concrete Kevin.'

Wolchek: “How come I’m getting all these customers calling saying that you are doing jobs for them and you take their money and don’t do the job?”

Some of Concrete Kevin’s customers think he’s a con. 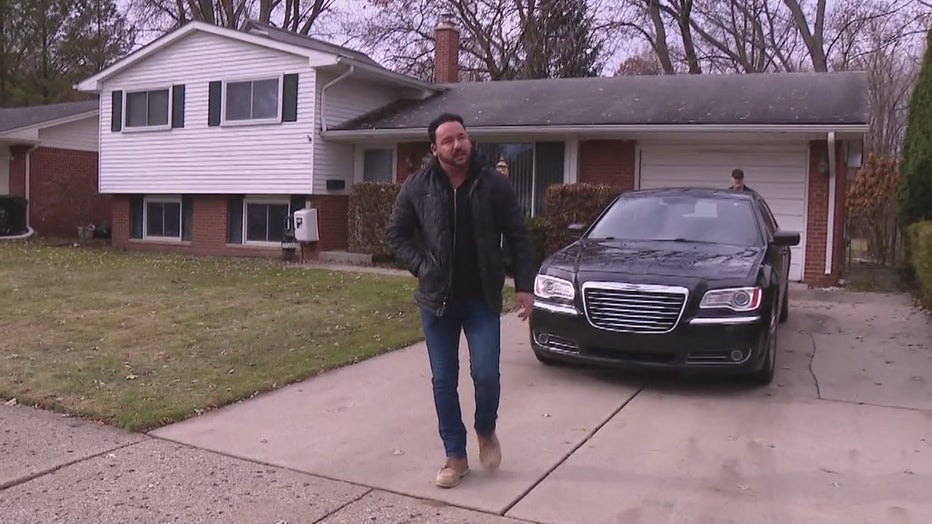 Some say Concrete Kevin is a clown.

“Isn't it more work scamming people and having to hide from them than to just do the right thing in the first place," said Sharon a customer/victim.

But these customers, who paid more than $20,000 for this unfinished wheelchair ramp for their disabled granddaughter, think Concrete Kevin and his crony are just cruel.

“I call them crooks and that's what they are.  Crooks," said Charles, a customer/victim.

Wolchek: “How come you guys don’t finish that job Kevin? Kevin talk to me.”

Concrete Kevin may be the face of the business, but this guy Travis says that he’s the actual boss.

“I’ve been told by my attorney not to say anything, just keep working,” Travis said.

Oh yeah this guy’s not suspicious looking at all. 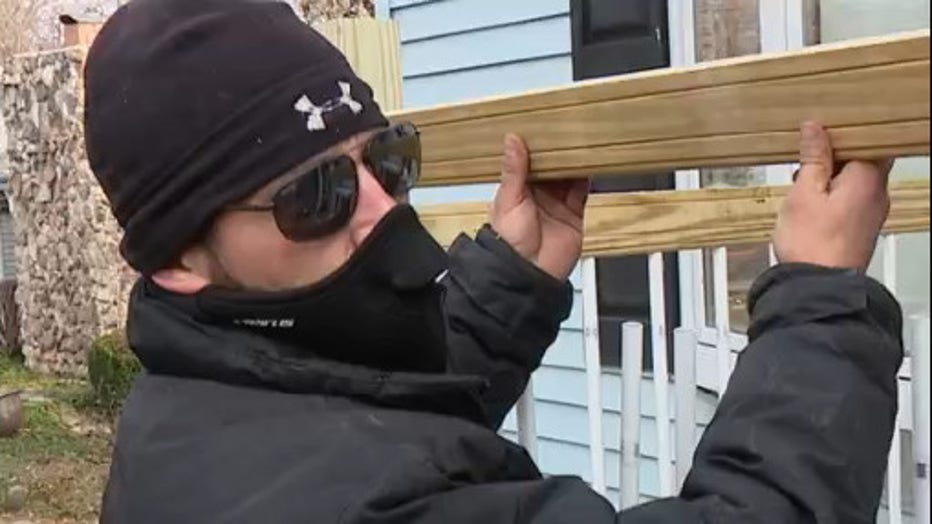 This is Jose. In February he gave Concrete Kevin and the company he works for, Ultra Concrete, a $7,500 down payment for a concrete slab in his back yard.

“He told me in the beginning of June I would be slated for the job and it's just been a nightmare ever since," Jose said.

Kevin came back in July and said they needed more money before they could get started.  Jose needed landscaping and had to get the concrete done first so he gave in, handing Kevin another payment of $4,074.

“He talks a good game, he says he’s going to do all these things, but as you can see, not one thing has been done,” Jose said.

Jose says Kevin never even gave him his last name, but he claims he’s part owner of the company.

Like most of the customers in this story, Jose was lured to Kevin from the website for a company called Ultra Concrete, the company all the payments were made to.

Sharon hired Ultra Concrete in June to put in an aggregate patio at her Macomb townhouse.  She said Kevin promised she could pay in stages, but when Kevin took her credit card, she was charged the whole amount.

Her patio was supposed to be aggregate concrete. Sharon got a horrible mess of a patio of regular concrete.

"They never took out a permit and so I have no choice, but to tear out the entire thing and start over," she said.

In March Vince and Jackie hired Ultra Concrete for a new porch and driveway.  In May, a crew came and busted up their old driveway and Kevin came back asking for more money. In total, they paid $7,500 dollars.

Kevin said they were being difficult and the job didn’t get done. That is until they hired a different company.

Then, a week and a half ago I met Charles and Debbie and their granddaughter, Kaylee who is disabled.

Debbie called Ultra Concrete in early July to build them a safe new porch with a ADA compliant wheelchair access.  They tore out the old wheelchair ramp and set up concrete blocks.

“For at least five weeks we had no access out of our home for Kaley and her wheelchair except for us to carry her out the garage in her wheelchair," said Debbie, the grandmother.

In September they finally got a ramp in. But when I came by it was a slippery, dangerous mess.

No handrails, no safety strips. Sharp hunks of concrete façade jutting off the sides with rusty screws protruding.  And you’re not going to believe how much they paid for this.

Wolchek: “That porch is dangerous.”

Wolchek: “Someone could slip with the wheelchair and she could fall and ...” 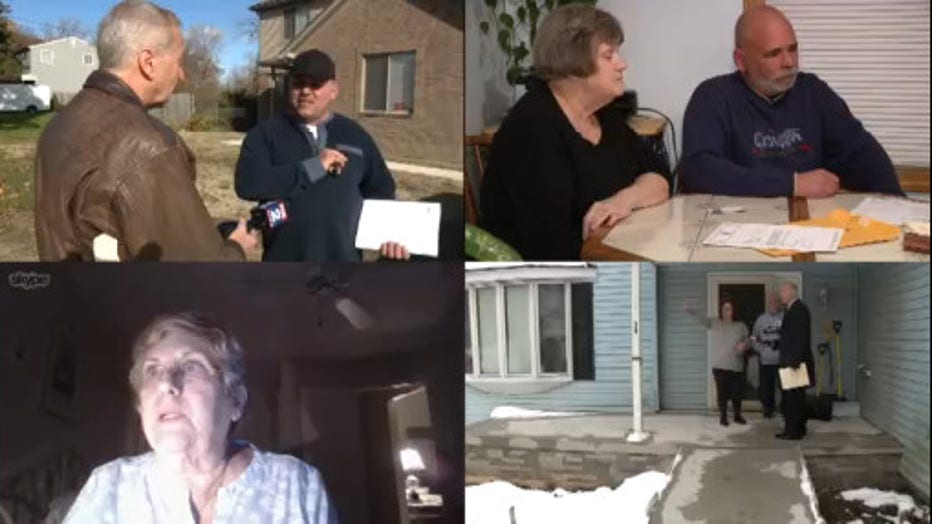 But interestingly, the family told me, they never heard of Kevin, the concrete salesman.  They say the guy who sold them the job was named Travis.  And so was the guy who did the patio.

“The other person is also named Travis but primarily he works by himself,” they said.

They show me a picture of Travis the worker. That’s sure not Kevin. That looks like Travis Setterington, the guy who’s supposed to be the owner of Ultra Concrete. So, on a hunch, I show them a photo of Concrete Kevin and -

Debbie: “Yes, and he says he’s the owner of the company.”

So apparently Concrete Kevin, decided to call himself Travis on this job.  What’s this guy got to hide?

Concrete Kevin is really Kevin Scott Harrow of Shelby Township. Kevin had his own construction company called HC Harrow -  but they had 33 complaints with the Better Business Bureau and an F rating.

In 2016 Kevin got in legal trouble. I’ll read from the Michigan Licensing Bureau’s report:

Kevin Harrow pleaded guilty to a misdemeanor charge of false pretenses with intent to defraud. (mcl 750.218). The licensing board also fined Kevin’s company $2,600.

On Friday I caught up to Kevin, right in the middle of another sales pitch, with a customer in Livonia.

Wolchek: “Yeah. How come I’m getting all these customers calling and saying you're doing jobs for them and you take the money and then you don't do the jobs?”

Wolchek: “What do you mean you don't know?”

Kevin: “This is insane.”

Wolchek: “Aren't you the Ultra Concrete salesman? What about that girl, the family out there, the McNeals, with the wheelchair ramp?  How come you guys don't finish that job?

"Kevin, Kevin. Talk to me. Come on man. Kevin?  You're leaving your customer like this?!

"You have to call Travis," he said before driving off.

After I speak to Travis on the phone, he comes out and finally starts working on the wheelchair ramp. And there he is on Monday morning dressed for freezing weather even though it’s 50 degrees outside.

Wolchek: “So how come it took so long to do this job?”

Wolchek: “Yeah, I know. I’m glad you’re finally working on it. What took you so long to get out here?”

He wasn’t out here, enough. Remember the family hired him in July and its almost December. And even though Travis is the real owner, he admits, neither he, or his company, has a contractor license.

Wolchek: “By the way do you have a permit for this job?”

Travis: “Yes, everything has been done.”

Travis: “The footings were done with everything else and the permits were pulled.” 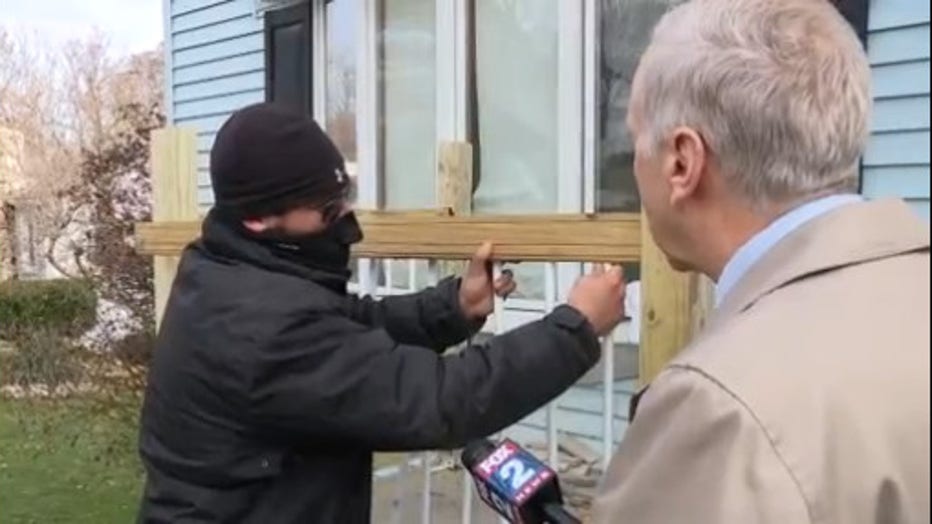 Wolchek: “So can I see the permits?”

Travis: “I don’t have the permit on me.”

Wolchek:  "And who was the contractor that pulled it.”

Travis, you sure must be cold wearing that mask. He says since I spoke to him Friday, all his customers have been taken care of.

Travis: “Everything has been resolved.”

Wolchek: “So your attorney has taken care of all this? You want to give me his name?”

Travis: “No I’m not, it’s already been resolved. If you’d like to contact him, you can go there right now”

Wolchek: “I don’t even know his name.”

I go inside to see just how “resolved” everything really is.

Wolchek: “What do you think of these guys?”

“I think they’re sham-ers, shysters, I think they like to rip people off,” said the customer/victim.

And he may be right, when we walk outside, Travis has bailed and doesn’t come back for the rest of the day.

Travis may be gone but he’s not forgotten, and Kevin we won’t forget you either, you are in the Haaallll of Shame.

Travis was a no-show for more than 24 hours. But he did return this afternoon. The McNeal family just want him to finish so they can take Kaylee down the ramp safely.

Travis sent me a statement saying "Personally resolving any matter with upset customers is my number one priority."  But Jose says he hasn't received any of his $11,000 back.

Vince says he got a call from Kevin saying he would get his money back, but hasn't yet. And Sharon hasn't heard a word.

(Producer note: this is the statement exactly as it was submitted to FOX 2 from Travis Setterington without editing:)

"Final Statement for you: spoke to my company attourney. My company Ultra concrete i Travis setterington soley own my company personally under my personal name, all money and contracts are in my possesion and im the only one access to funds and any final decisions made, so persoanlly resolving any matter with upset customers is my number one priorty to close season out happily.   You recently brought to  my attention a couple upset customers that were contacted and will all be resolved happy clients as well as a concrete finisher/foreman  kevin harrow about issues with customers and previous company he owned that was closed that grew too fast and and had passed complaints and issues which is not my company dont want my company associated with his old company.and slandering mine ,   he works for me as a employee that is all  because hes good at pouring concrete and  is a foreman and pours concrete on job sites for Ultra concrete. Ill continue to move forward positively and wrap up any complaint and your mediation was helpful ."