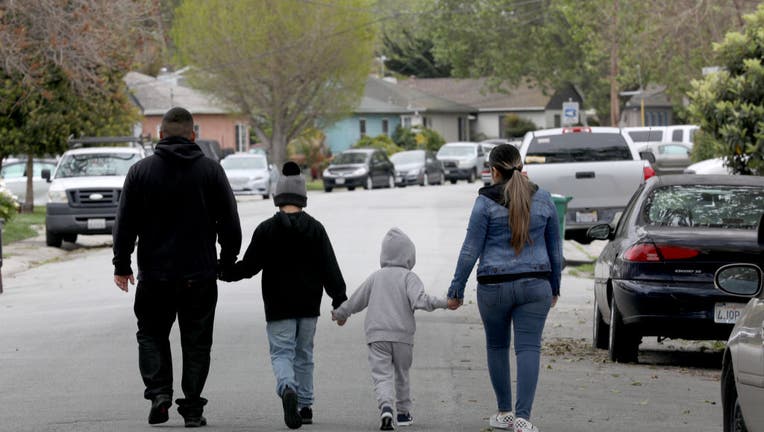 SAN LORENZO, CA - APRIL 9: Christian (left) and his wife Monze (right) were laid off from restaurant jobs in mid-March and not qualified to receive unemployment because they are undocumented immigrants as they walk with their 9 and 4 year old sons on

His construction jobs were not deemed essential when San Francisco, other Bay Area counties and then the state of California issued tough shelter-in-place orders last month in the hopes of curbing the spread of coronavirus by keeping people indoors. And even though house cleaning is allowed under certain virus protection allowances, his girlfriend's clients have canceled her visits.

“I have not made one dollar,” the 37-year-old Gonazalez said in Spanish through an interpreter from the San Francisco Day Laborer Program. “My work has stopped. We have been living on savings. In one week, our money will run out.”

He said he sleeps only three to four hours a night because of all the stress: How will he pay the water bill? The electric bill? Send money to his family in El Salvador who are counting on him?

“When I open the fridge, I see there’s no more milk and it’s very distressing,” he said.

In some respects, Gonzalez’s situation is like the at least 6.6 million other Americans, who filed for unemployment as of Thursday.

But unlike most of them, Gonzalez is undocumented.  That makes him ineligible for any of the federal stimulus money, up to $1,200 per adult, to be distributed to roughly 60 million Americans. 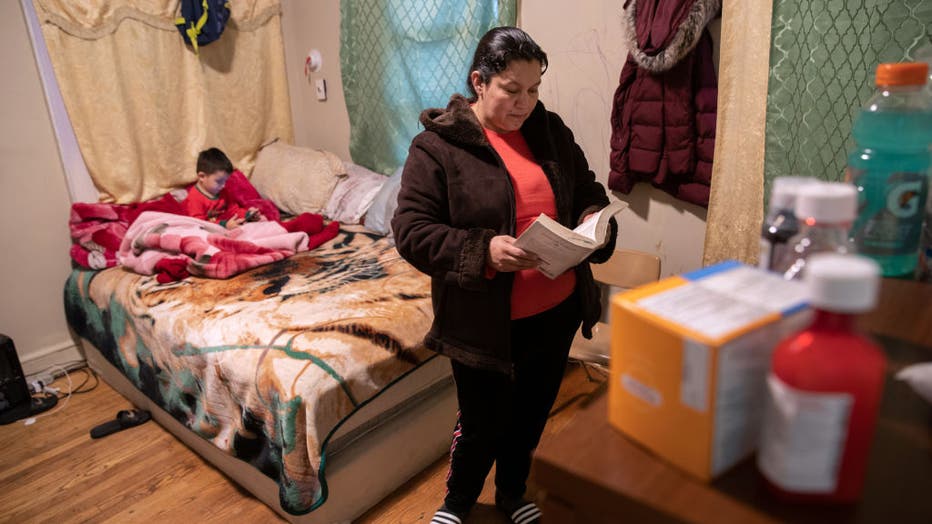 Instead, Gonzalez falls into a group of about 10.5 million undocumented people living in the United States who will not qualify because they don't have Social Security numbers. Those who use an individual Taxpayer Identification Number, including most living in the country illegally, are excluded.

Gonzalez said came to the United States nearly two years ago to escape the MS-13 gangs who were trying to kill him. He said they shot him once before and he had to leave his home.

California Gov. Gavin Newsom last week said at a news conference that he is working with the Legislature on an economic stimulus package for immigrants in the country illegally and others not covered by the federal stimulus package approved by Congress. Already, cities including San Francisco and Oakland have set up emergency funds for residents, and undocumented immigrants are able to apply for relief there.

In California, there are about 2 million people who are suspected of living in the country illegally, according to the California Latino Legislative Caucus. The group has asked Newsom to create a “Disaster Relief Fund” for cash payments to those immigrants until the state's emergency proclamation is lifted or they are able to return to work.

Newsom said “all of that is being considered,” adding it is part of a broader package he plans to unveil in May. He added: “Californians care deeply about undocumented residents in this state."

There are indeed critics who don't think undocumented immigrants should be getting help, especially when American citizens are facing drastic economic hardships now, too.

“So we the citizens are not going to get state money for stimulus, but illegals who are mostly on welfare will get stimulus because they need it more than citizens?" Pat Pack wrote on Facebook. “Remember who voted for this.”

And Debbie Lencioni-Rocha wrote: What part of illegal is NOT understood? They are ILLEGAL!! You go back to your country so they can help you! If you want to come here do it legally! Become a citizen and a proud one! Learn the language, the culture and contribute to our society and community. Don't come here with your hand out expecting to get free ride! We pay taxes and so should you!” 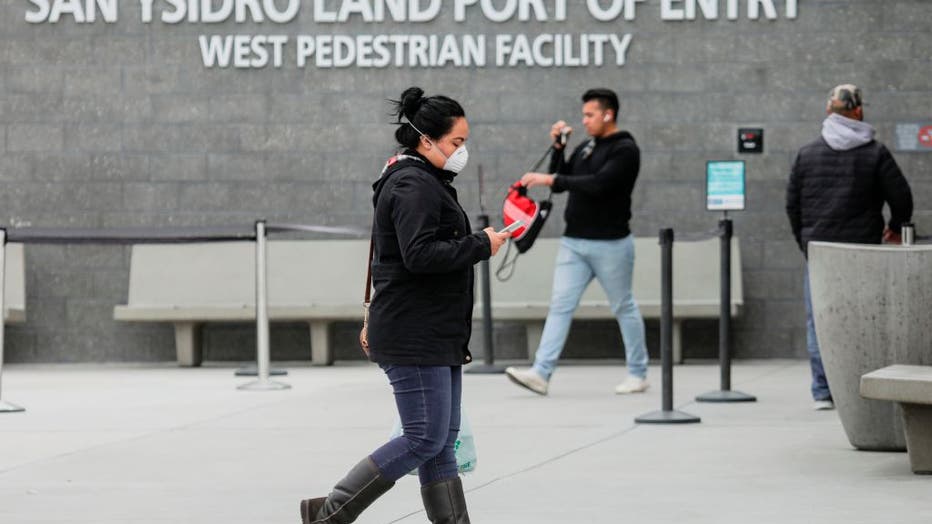 “I see the state of California and its budget as a house of cards and with this coronavirus-induced recession, I’m just trying to figure out where the money would come from,” said state Sen. John Moorlach, a Republican from Costa Mesa. “I would say helping undocumented would be a luxury item.”

But many say immigrants, undocumented or not, allow the rest of the country to live in luxury and contribute to the backbone of the U.S. economy.

Immigrant rights advocates all over the country, including the Bay Area, are already raising money and connecting immigrants with services and tenants’ rights lawyers.

Kateri Simpson, a teacher at Life Academy who also volunteers with East Oakland DREAMers, has been busy crowdsourcing money to support the migrant community.

“We try to triage who is the highest priority,” she said. “But everyone is a high priority.”

Aside from the money, Simpson and her colleagues are trying to connect immigrants with places to get food, health services and how to advocate for themselves with their landlords.

“That can just take some of the worry away,” she said. “Just letting them know where the food banks are and where you can pick up school lunches.” 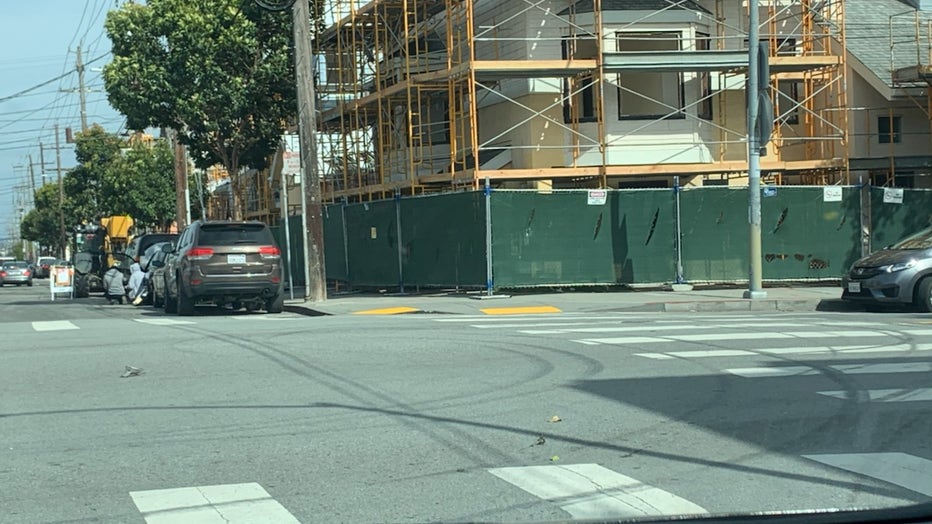 Diana Flores, director of community and engagement and organizing at Dolores Street Community Street, is doing similar work in San Francisco. A week ago, her nonprofit has received about $70,000 from private foundations and coalitions, while another fundraising effort, UndocuFund, has raised closed to $20,000. They received 900 applications and 600 were in Spanish, she said. There are about 224,000 undocumented people in San Francisco and even though the fundraising efforts have been great, Flores noted “we need more.”

Derek Schoonmaker, the workers’ rights directing attorney at Central Legal de la Raza, notes that what’s unprecedented about this situation is that everyone is in the same situation. And while that might make things emotionally more comforting, in pragmatic terms, it’s not.

“Everyone is trying to come up with enough for rent and food,” he said. “In other times, you could turn to friends or family for a place to crash. I really worry that now, people don’t have a place to turn. I really don’t know how people are getting by.”

He is hoping that more employed people will step up, following the lead of the United Educators of San Francisco and a group of Oakland teachers, who are pledging to donate their stimulus checks to undocumented immigrants, since they make up a large part of the country’s workforce and aren’t eligible for a boost.

Gonzalez appreciates every little bit of help he can get.

He and his girlfriend have been scouring the internet trying to navigate what funds might be available to them. But it’s hard.

“As an immigrant, it’s very difficult finding access to resources and food,” he said. “It’s hard and confusing.”

And because of his legal status, Gonzalez said he doesn’t feel like he can tell his landlord that he might not be able to come up with next month’s rent.

“That would really create problems for us,” he said.

Meanwhile, he is calling up every friend, or friend of a friend, inquriring to see if they have extra work, even if it’s just for a day.

He’s also checking in to see if anyone has any extra rice or beans. “Food is the most important thing,” he said.

Going to a homeless shelter is not really an option.

“It’s too dangerous,” he said. On Friday, San Francisco health officials said at least 70 people tested positive for coronavirus and one homeless shelter.

He said he needs a way to find money by next week.

Lisa Fernandez is a reporter for KTVU. Email Lisa at lisa.fernandez@foxtv.com or call her at 510-874-0139. Or follow her on Twitter @ljfernandez

Fighting for our Workers  (This is the fund that would go directly to Marcos Saul Aurora Gonzalez. You can specify which worker you'd like to honor.)

Resources for immigrants during the coronavirus

Give to the City to respond to COVID-19