DETROIT - Pair up with a friend or significant other, tie your hands around your back, and eat an entire pizza, using nothing but the bond two loved ones share.

It's the kind of teamwork that a mother bird and her chicks would win in a heartbeat.

But this isn't a nature documentary, it's Buddy's Pizza in Detroit - albeit, equally as primitive.

The restaurant received almost 200 entry applications for the competition, which awards the fastest eaters unlimited pizza for a year, and eternal glory if food competitions are a source of pride.

For five duo sets, it was glorious, prideful, and if your Stephanie and Brian on team three - akin to attacking a wild animal.

So what strategies did these hungry hungry Michiganders plan to employ?

"Use the water to wash down the pizza, stuffing it into the face," said one.

"We're gonna team up one slice at a time and work it from the edges to the middle."

If you're Kristen and Heather, you practice ahead of time.

"We went to the auburn hills location and practiced in a corner booth," they said. "They (People) were so unphased." 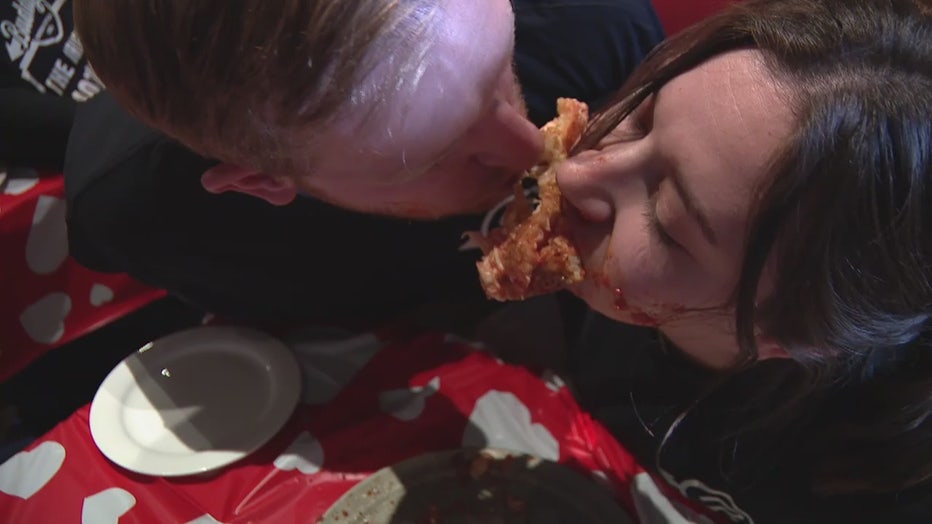 Things got messy quickly. It was a fearsome duel, complete with Team three's Brian literally eating the pizza out of Stephanie's mouth. But it paid off: the two won.

"That was the most teamwork we've ever done in our life," said Stephanie.