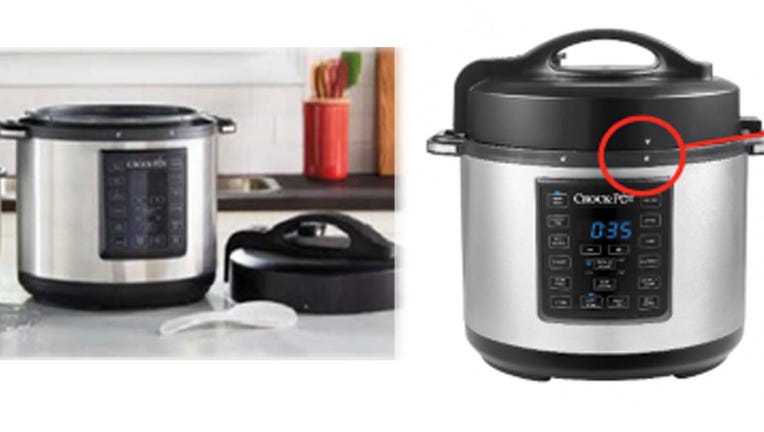 WASHINGTON - Sunbeam Products is voluntarily recalling more than 900,000 of its Crock-Pot 6-Quart Express Crock Multi-Cookers for a potential burn hazard after dozens of injuries were reported.

"The recalled Crock-Pot multi-cooker can pressurize when the lid is not fully locked. This can cause the lid to suddenly detach while the product is in use, posing burn risks to consumers from hot food and liquids ejected from the product," the notice states.

Sunbeam Products has received 119 reports of the lids detaching, "resulting in 99 burn injuries ranging in severity from first-degree to third-degree burns."

The CPSC says about 914,430 units were sold in the United States, as well as an additional 28,330 in Canada. They were sold in-store and online at Walmart, Target, Amazon and other retail stores nationwide between July 2017 through this month.

Consumers were asked to immediately stop using the recalled Crock-Pot in pressure cooker mode, but "may continue to use for slow cooking and sautéing," the notice states.

Individuals should contact Crock-Pot immediately to obtain a free replacement lid at 800-323-9519 from 9 a.m. to 5 p.m. ET Monday through Friday or online at recall.crockpot.com.

"Consumers who continue using the multi-cooker in pressure cooker mode while waiting for the replacement lid should be certain the lid is securely turned to the fully locked position by aligning the arrow on the lid with the lock symbol on the base," the CSPS states.