Former Macomb County Prosecutor Eric Smith agreed to a plea deal last week and admitted to taking kickbacks from a close friend identified only as 'Person A'.

In photos obtained by Wolchek, Smith is seen posing during a charity golf outing that was paid for by a check from the Macomb County Forfeiture Fund Account. It's because of payments like this and others that Michigan Attorney General Dana Nessel charged Smith with ten felony counts, including embezzlement, and running a criminal enterprise.

His house and office were both raided last spring.

But federal agents also investigated, leading to the obstruction of justice charge, which we'll come back to.

In January, Wolchek investigated a Macomb County builder whose customers accused him of misusing tens of thousands of dollars of their construction loan money. Several people suggested Wolchek look into the friendship and business relationship between Paul Esposito and Eric Smith.

Esposito's name showed up on campaign finance statements that Smith is required to file with the state. There's also entry after entry where Smith paid rent to Esposito and Sunset Homes to the tune of $500 per month. 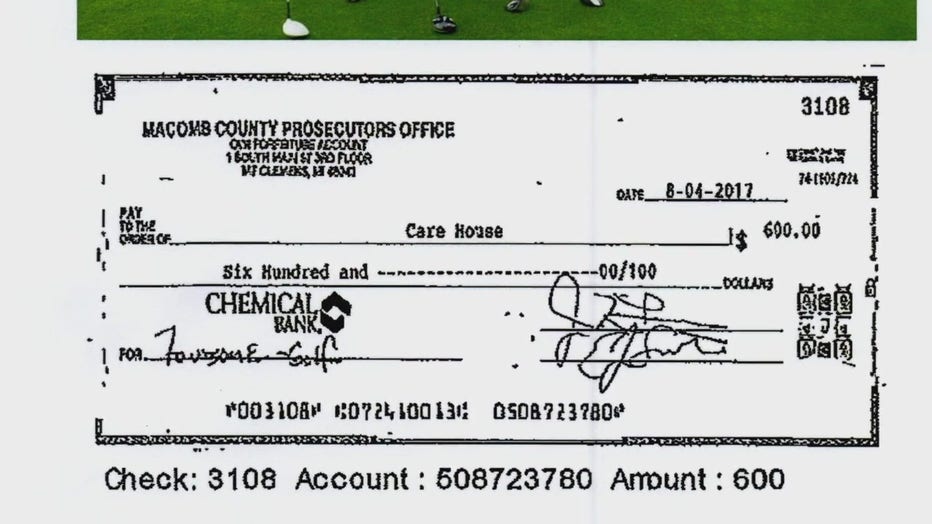 That gets us back to the federal case.

The plea agreement says Smith cashed more the $50,000 worth of checks written on the campaign fund account for rent of property belonging to someone identified as "Person A," then "Person A" kicked back all the money and Smith used it for personal expenses.

When Smith found out that federal agents were about to interview "Person A," he asked "Person A" to lie and claim the money that was kicked back to Smith was a loan.

According to Smith's campaign finance records, the only person who collected rent was Paul Esposito of Sunset Homes.

So is Esposito "Person A?"

When Wolchek called and asked Esposito, he hung up on him.

He called Eric Smith too, who didn't call him back. But he did has him about the 'rent' in February.

"Neither our prosecutor's office nor I have anything to do with Mr. Esposito's construction business. To put me into this story, simply because Mr. Esposito is a friend of mine, is purely media sensationalism," he said.

Smith signed an agreement saying he would plead guilty to obstruction of justice and he agreed to give up his right to appeal, on any grounds, if his sentence "does not exceed 21 months" in prison.

The U.S. Attorney's Office declined to comment on this story.

Smith is due to be arraigned on the federal obstruction charge on Friday, Sept. 18 and is due back in court on the state felony charges in October.