With the temperature dip this week, an apple orchard owner is using fires to keep her trees warm.

DETROIT - Leandra King's eyes said it all: "I'm tired. Too tired to talk."

She's laughing as she says it. King has been up for about 48 hours straight saving her orchard from almost certain demise.

That's because the cold air that swept through Michigan on Wednesday didn't just leave driving conditions worse. It threatened the blossoms that have appeared on the 87 apple trees at Detroit Farm & Cider. And that can be a big problem when cider and apple prospects depend on the success of spring flowering.

But King has a technique for keeping her blossoms alive. Dozens of pit fires and oil drums with wood-burning dispersed around the orchard.

Detroit Farm & Cider is located In the Boston-Edison neighborhood, off of 1600 Lawrence Street.

The unseasonably cold air that swept through the region on Wednesday brought freezing temperatures and snow to Metro Detroit. That can prove a disaster for any farmer that relies on their spring success to make money in the summer and fall.

At King's orchard, that includes apple picking and cider, both staples of autumn,

To keep the deep freeze from ruining the blossoms, the orchard is using a technique called smudging. Long a practice of burning herbs or resins as part of a ceremony celebrated by indigenous people in the U.S., the tactic has been co-opted to help keep farm yields alive.

The idea is the smoke produced from the burning will retain heat in the surrounding area longer, and subsequently keep the blossoms alive. 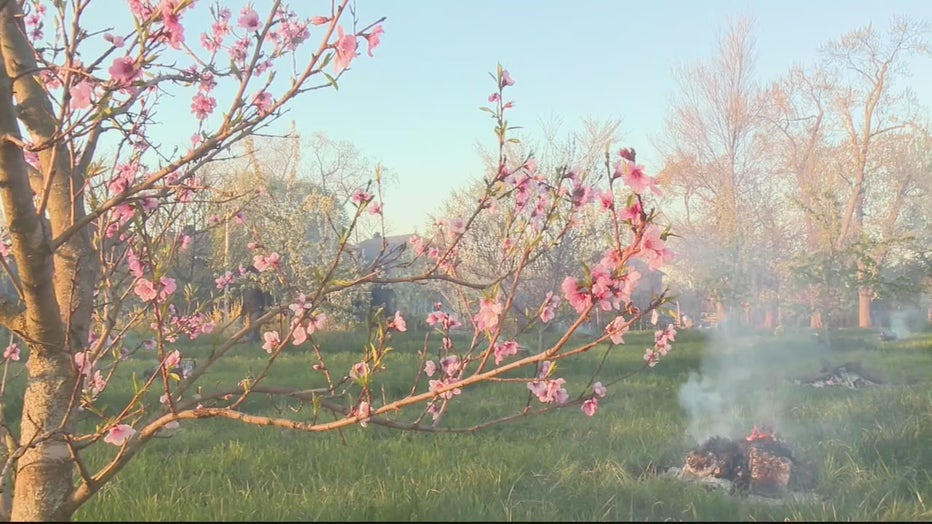 To keep the deep freeze from ruining the blossoms, the orchard is using a technique called smudging.

Some farms use cast iron heaters called smudge pots. But at Detroit Farm & Cider, it's little fires feeding on wood and charcoal that dot the area and surround the trees.

Keeping all those fires going isn't possible without all the volunteers that King has. And there is always space for more help.