FOX 2 - Hailey Zureich from Ferndale wears many hats with jobs including life coach and standup comedian.

Zureich is no stranger to using the internet to network.

Hailey Zureich says they made a fake dating profile posing as her on dating website Bumble. She shared screenshots of the account and messages the culprit sent with us.

"I have a lot of just in my regular life, people coming up to me saying 'Hailey it's so nice to see you, so nice to meet you in person,' because they've been connected with me virtually or on stage

But now Zureich's unnerved to learn someone, or something, used her information including where she went to school and even the year she graduated.

Zureich says they made a fake dating profile posing as her on dating website Bumble. She shared screenshots of the account and messages the culprit sent with us.

"I've worked really hard to figure out and be able to articulate who I am as a person and to have someone else feel as though they're taking that away from me is heartbreaking," she said. 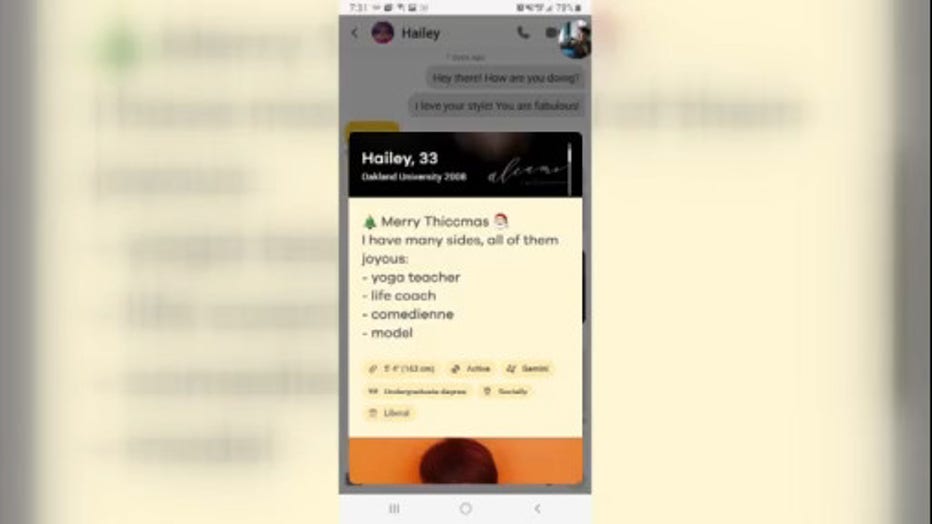 "It's something we see more often," said Sgt. Baron Brown, Ferndale. "Unfortunately right now there's not a lot of teeth in any laws that we can use to go after people unless they're trying to get money."

Ferndale police say the rise in technology is a double edged sword, and unfortunately they are seeing several similar situations across social media.

"Things you can do are, to regularly search your public photos in Google," Brown said. "There's a drag and drop on the google bar and it will alert you to other sites that might be using that photo or people who are using the photo."

Zureich says she contacted Bumble who took the account down and blocked the user. Meanwhile Zureich is using this as a learning experience.

"I get to choose whether I empower myself to get more information to be smarter about where I share, and how I save my content, and work with others who have been impacted by this - to learn more how to take care of myself," she said. "But I'm not going to stop being who I am."

FOX 2 contacted Bumble. It replied a statement which says in part, "We have a zero tolerance policy for fake profiles and we are asking anyone who sees one to contact us."

The full statement is below:

"At Bumble, user safety is our number one priority. Since day one, our goal at Bumble has been to create a place where our community feels safe and in control of their connections, and since that time we’ve invested heavily in features designed to reinforce that mission. We employ thousands of moderators around the world who proactively ensure that our community is adhering to our guidelines. Plus, we are also one of the first brands in our space to launch a feature in the app where profiles are verified by our full-time, dedicated moderation team to keep members of our community safe and happy.

"In an effort to continuously keep fake accounts at bay, we recently rolled out a new feature that allows our users to request that their matches photo verify their profile. The addition of the ability to request verification adds an extra layer of confidence to every interaction. On social media platforms, a blue check mark typically indicates a celebrity, but on Bumble that same blue check mark means you’re a real person.

We have a zero tolerance policy for fake profiles on Bumble and a team that works 24/7 to keep them out of the Hive. If a user ever sees something suspicious, we ask that they don't hesitate to report it to us by using our robust block and report system. We are proud of our community experience team for creating a safe space for all users to connect, as exemplified by their swift response in blocking the fake account previously mentioned."