The makeover for the park in front of Michigan Central Station comes as Ford continues to revitalize the old train depot.

"It's actually going to be a 30%  bigger park - when you take out asphalt, and we're going to replace it with grass and plaza and trees and picnic areas and benches," Mayor Mike Duggan said. "It's so beautiful to think about these two beautiful partners - the station and Roosevelt Park have this long term relationship and their next chapter looking forward, and this beautiful renovation is one more piece of that."

The renovation will re-route Vernor around the park instead of through it. Utilities, lighting, and landscaping will also be upgraded, and new walkways and an event lawn will be added. 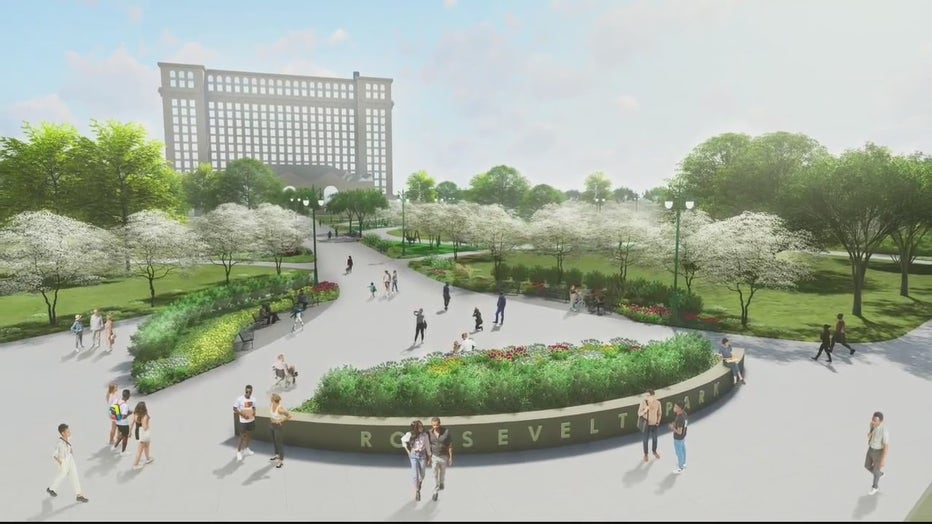 The park will be connected through greenscapes to other parks and the Riverfront.

"It's been tremendous to see the amount of engagement that's happened over a three-year period to get us to where we are today," said Antoine Bryant, the Director of Planning and Development for the city.

It's a project that has involved many people in the community.

"The community's been incredibly engaged - from both Corktown and Mexicantown on this project," said State Sen. Stephanie Chang.

The expected completion date is next spring.

"I'm going to predict to you that this particular site is going to end up being one of the most beautiful and iconic sites in the city of Detroit. All those images that went around the world for all those years about the abandoned train station, you're going to see weddings and gatherings in Roosevelt Park," Duggan said. "This is going to be the image of the city, and it's the image our city deserves."