Family reunited with lost Pomeranian after nearly a year

The pup ran off from their yard, in an elf suit two days before last Christmas.

DETROIT (FOX 2) - Just as this Detroit couple was coming to terms with never seeing  "Poe" the pomeranian again - they've been reunited after 10 months.

The pup ran off from their yard, in an elf suit two days before last Christmas.

"I never gave up hope," said Starla Goggins."I would drive up and down the street hoping I’d find his green and red elf suit."

For a while they thought Poe had been hit by a car and might be somewhere, dead.

"My whole family, my sisters, everyone came out," she said. "It was our own personal search team. I cried for three days straight."

They papered the neighborhood with flyers, and searched for weeks. but there was no sign of Poe until this week on a walk, with Poe’s partner named "Kuban."

"And I looked to the left and Poe was barking at me in a neighbor’s back yard," she said.

"It was like divine intervention, we were going to take a right and then something told us to make a left," said Jamon Burse.

"So I pulled out my phone and I'm like, look at his little booty and his marks and I’m like, that’s my dog," Starla said.

It turned out someone found Poe, not too far from their house on Detroit’s east side. He had been living with a new family all along and was renamed Oreo.

It took some convincing, but the couple was able to prove that Poe was their's and the new family gave him back.

"As soon as she brought him, he jumped out and he and my other dog were running down the street like he was never gone," said Starla. 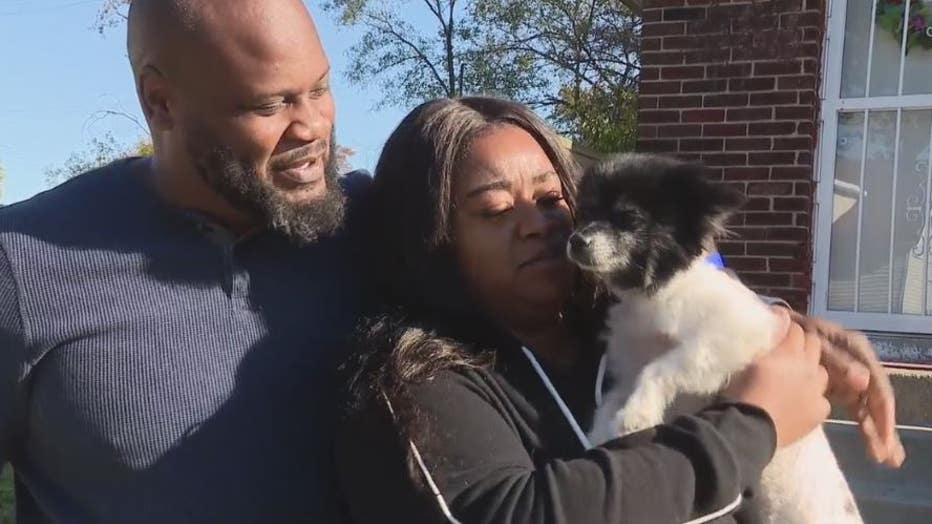 "We missed his spirit around here," Jamon said. "And to have his spirit back he brought the house back to life."

They are thankful someone took care of their baby, as they added to keep the faith if you’re missing a furry friend.

"The answers are out here," she said. "I guess you just have to keep looking."