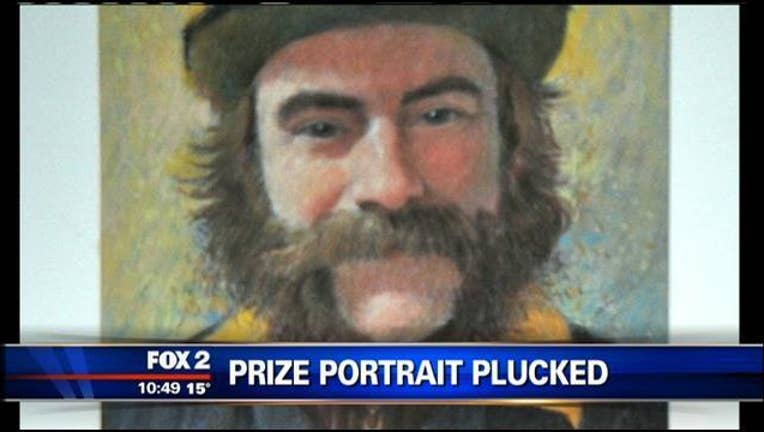 A portrait of Farmhouse Steve has gone missing. Steve is a feather bowling grand champion. You've probably never heard of feather bowling but on the east side, it is a pretty big deal.

To get your portrait up on the wall near the feather bowling lane at the Cadieux Cafe on Detroit's east side, you've got to be really, really good.

Erik Greer is a former grand champion and he talks about how passionate the sport of feather bowling can get. "

Greer: "A friend of ours from the league had a heart attack, was in the hospital, Thursday night comes up. This is a guy that wants the championship bad. He checks himself out of the hospital, with the drip, comes down here and is standing in the lane with his drip and the pole, throws the balls, gets his points, goes back to the hospital, checks himself back in."

Farmhouse Steve a relative newcomer to the feather bowling league. He has a playing style unlike any other.

"It looks a little dangerous, coming in a little fast, ah. A risk taker a little bit," says Steve, referring to his style of play.

When he first came to the league, people didn't quite know how to handle that.

Feather bowling is an unusual sport. You put a feather at the end of a dirt lane and then roll massive hunks of wood at it.

It is arguably the rarest organized sport in the United States of America. Farmhouse Steve took to the sport and excelled. Winning the 2014 championship.

"To be up there with them is just, you know.... it was a highlight of what has been a rough year," says Steve.

Recently Steve was diagnosed with bladder cancer and then his photo on the wall disappeared.

"Somebody scrooged me," he says.

It has become almost an unspeakable act, perpetrated on someone who is face to face with their mortality.

"We have this ceremony, and part of it is... the portrait we bring to the funeral home. It was part of the whole business with the flowers and of course, we always show up and then we come back to the cafe, we roll their last ball and the portrait gets hung back on the wall, and there it is," Steve says while clearing tears from his eyes.

Farmhouse Steve is a life-long east sider, so he's not giving up.

"The city I love routinely kicks me often, but like a girlfriend who you're just in love with and keeps coming up all screwed up on crack. I'm not a kid and you didn't steal my Fisher House building blocks or whatever -- this may be the one thing that I'm actually going to leave be behind," says an emotional Steve.

There's no reward posted, but the feather bowlers are serious about wanting that portrait back.

I asked if they found out who has it, and they are not willing to bring it back, would you bury them like up to their neck and start rolling these things at them. Maybe give them a little "Belgian" justice?

Greer offers this: "M.L., there's certain things in the feather bowling league that we can't discuss. But you're getting kind of warm there."

If you know anything about the missing portrait or want to learn more about feather bowling contact the Cadieux Cafe.