Several Detroit fire crews and emergency trucks were on the scene of a collapsed structure in a northern part of the city. The scene is on West Hollywood Ave, just west of 7 Mile near John R.

DETROIT (FOX 2) - A Detroit firefighter who had been trapped in a vacant house fire that collapsed, has been pulled from the debris and rushed to the hospital.

The Detroit Fire Department responded to an initial report of a house fire at a vacant home on 82 Hollywood Avenue near Seven Mile around 1:30 p.m., according to Detroit Fire Commissioner Charles Simms.

According to Simms, one firefighter suffered a broken finger and a second was hospitalized as a precaution but didn't appear to have serious injuries. A third was trapped until around 3 p.m. when the firefighter was pulled from the damage and was tightly strapped into a stretcher where he was moved to a waiting ambulance.

The firefighter was then rushed to Detroit Receiving Hospital and, as of last check from the fire department, he was conscious and alert.

Just before 4 p.m., FOX 2 learned the firefighter was being checked out at the hospital but was ‘cracking jokes’ with those around him.

At least eight firefighters were hospitalized after the collapse, most of them for heat exhaustion, and that includes the three who were initially trapped.

It started as a mayday call with firefighters trapped, as an abandoned home caught fire Thursday. With the fire out and firefighters expected to recover, finding what started it, is the next challenge.

Firefighters hurt but expected to be okay after burning home collapses

Detroit firefighters rushed to save one of their own after a house fire caused an abandoned home to collapse around him Thursday afternoon.

The Alcohol, Tobacco, and Firearms (ATF) and fire department investigators are on the scene and will process evidence once its safe.

Simms said the home was vacant and they could not confirm an origin behind the source of the fire. However, earlier in the day, a ‘Be On the Lookout’ (BOLO) was issued for reports of arson in the area.

"If it was intentionally set, I'm looking to get this arsonist charged to the fullest extent of the law," he said.

There were approximately 20 different emergency vehicles on scene for the fire. Several firefighters could be seen digging through debris at the structure, appearing to search for one of the firefighters that was still trapped.

Firefighters were also seen forming a line into the dilapidated structure and passing tools including chainsaws and shovels to dig into the debris. As the search continued, those tools switched to IV bags and medical equipment.

Water up to the firefighters' knees also flooding Hollywood Ave. It's unknown how this is connected as there has not been significant rainfall on Thursday.

Multiple emergency medical units were called to the scene around 1:30 p.m. 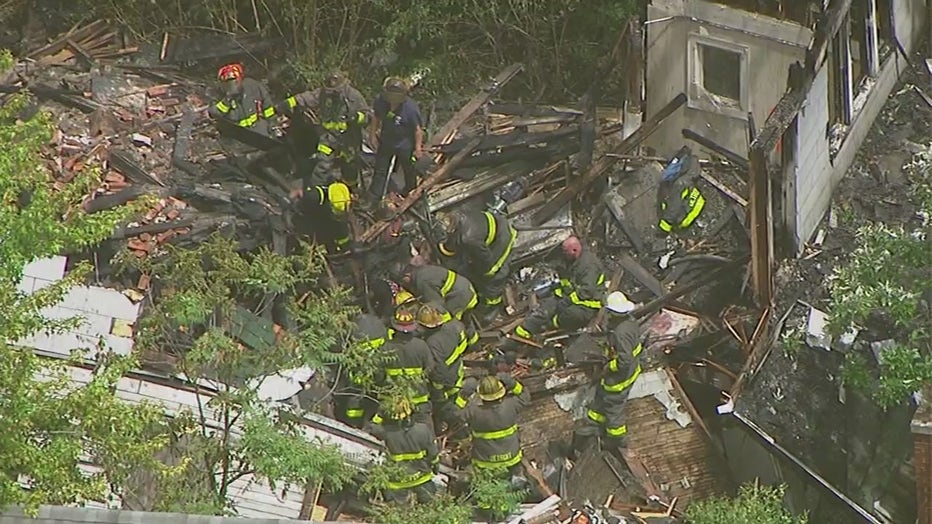