DETROIT (FOX 2) - From burning fires to life saving rescues Detroit firefighters go on thousands of runs each year, putting their lives on the line every day.

On Tuesday several were honored for their heroic work.

From burning fires to life saving rescues Detroit firefighters go on thousands of runs each year, putting their lives on the line everyday.

Firefighter Mark Taylor described the frightening moments he felt as he was trapped underneath debris burning alive after the roof of a house on Whitaker in Detroit collapsed.

"Everything that would go through your head, (like) is this it, am I going to die in here," said Taylor. "I felt really confident, I know who I work with. These are the toughest guys on the planet so I knew they were coming to get me. It was just a matter of time, but I did not know how much stuff was on top of me. I did not know how long it would take to find where I was at, and I was burning."

Everyone else was able to escape in time. But as soon as the other firefighters at the scene realized their fellow first responder was still inside - they didn't think twice before heading back into the roaring fire to save him.

"Although there was a great likelihood of a secondary collapse, it did not hinder these heroes from their task, which was to save one of their own," said Detroit Fire Commissioner Eric Jones.

Detroit firefighter Jarrod Barber is the one who spotted the reflective patch on Taylor's gear buried underneath the rubble. All of the firefighters on scene acted quickly to dig him out of the debris and carry him to safety.

"(I was in) a lot of pain," Taylor said. "I was more happy to see their faces and for them to drag me out of there."

"He hung in there why he was burning performing his duty going above and beyond," said Barber, "Never cried, never stalled out, and I love him."

For their acts of bravery and critical response efforts - the fire commissioner honored several of the firefighters, who saved Mark Taylor's life.

"I'm very proud of my son, so proud of the men who saved my son's life," said Susan Taylor, Mark's mother.

"I love these guys." Mark Taylor said. "I counted on them every day and they pulled through exactly when they needed to." 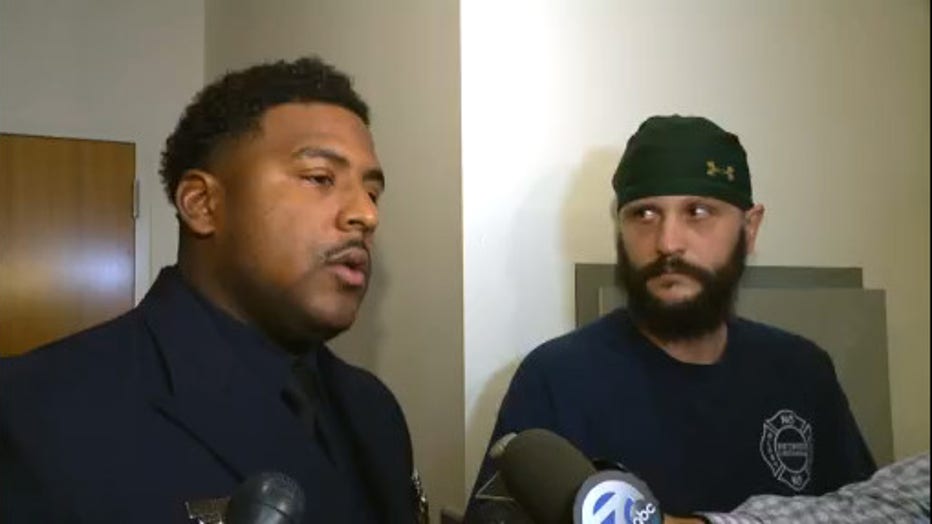 It's what these firefighters do - put their lives on the line every day to save others.

Several more firefighters were honored when they rescued a worker in November who was became trapped in a trench on Universal in Detroit.

When emergency crews arrived, the man was buried to his shoulders in clay, pinched behind a backhoe bucket. They lowered oxygen, and using trench rescue equipment and relentless digging for 6 hours and 49 minutes - they were able to rescue the man alive.

"These members truly acted above and beyond," Jones said.