DETROIT (FOX 2) - Detroit firefighters rushed into a family's home on fire and found a baby they didn't know was there on April 5. Now there are serious questions whether the adults who escaped ever told firefighters that the baby was inside.

"I saw something out of the corner of my eye wiggling and it was a baby with some sheets over here," said Lavaughn Williams. "And she was face down and she was wiggling like she was struggling to breathe. The smoke was heavy in the room, so my parental instincts kicked in, I am a father, thinking of my child, I picked the baby up and ran out quickly as possible."

Firefighters say that none of the people told them there was a child in the crib wrapped in blankets only that there were dogs in the basement.

Williams was stunned to find an 18-month-old baby girl inside a smoke-filled room in the burning house on Detroit's east side on the 11800 block of Riad Street in the early morning hours.

The fire department told FOX 2 that four adults managed to get out of the house including the baby's adoptive mother. Firefighters say that none of the people told them there was a child in the crib wrapped in blankets only that there were dogs in the basement.

The 911 dispatcher on the police and fire scanner can be heard saying that dogs were inside the house.

"We pulled near 20 puppies and or dogs out of the building," said Mike Nevin. "(They) never mentioned, never once mentioned, a child in the building."

Nevin was the DFD batallion chief at that house fire on Riad. He refused to turn the child over to her adoptive mother after Williams rescued her, instead medics took the baby to Detroit Children's Hospital where Detroit police and Child Protective Services got involved. 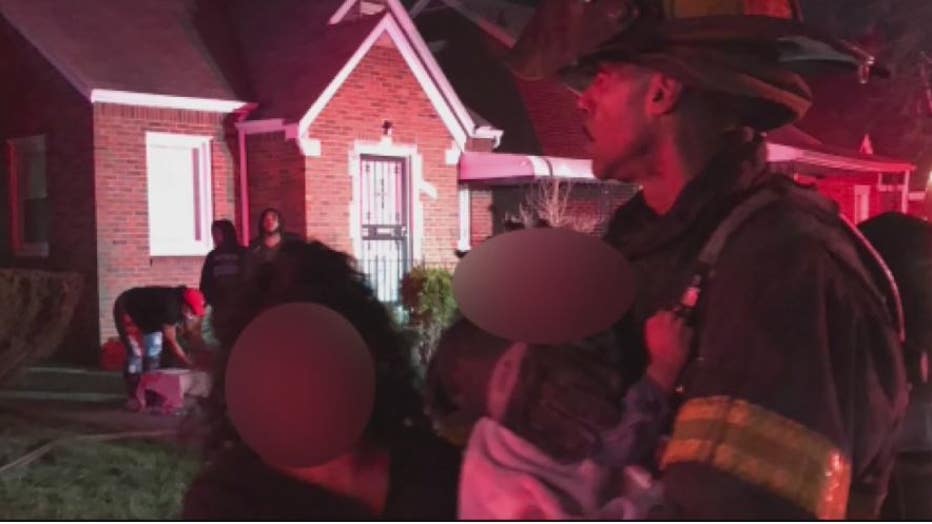 Detroit Firefighter Lavaughn Williams with the baby he rescued inside the burning home.

A neighbor, who did not want her face shown on camera, says she was there when firefighters first arrived.

"Due to that fire, they try to make it seem like oh she did something like she didn't care about the baby or whatever and that's not true. That is not true," she said.

"Absolutely not, and I've got 21 witnesses that wear black fire gear and hard hat helmets that'll tell you the same thing," he said. "So no. That's a big n-o  there."

FOX 2: "What would've happened had you not got that baby when you did?"

Detroit Fire said that the adoptive mother had been in touch with police earlier that night for some kind of domestic disturbance.