DETROIT - Detroit lawmakers, both past and present, leveled criticisms against maps approved by Michigan's redistricting commission on Monday while announcing a lawsuit alleging they dilute minority voting power in the city.

"We need to have people who like us to represent us," said Natalie Bienaime, a resident of the 13th District.

"I did an interview and somebody said ‘well, the New York Times said it was fair.’ That is such a subjective word, like justice is," said District 6 Rep. Tyrone Carter. "If we're 13% of the population, then we need to represent that in the state house."

Carter was referencing a news story published last week about new maps that Michigan's Independent Redistricting Commission approved. They represent the culmination of months of debate over what the state's future political boundaries will be. 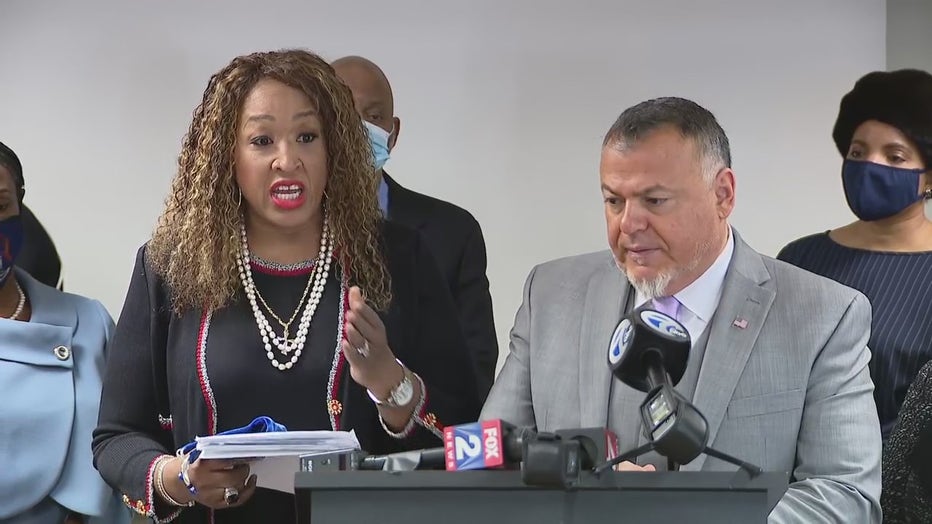 According to more than a dozen lawmakers that currently or used to represent Detroit, the maps disenfranchise minority voters by diluting their voting power. The elimination of majority-minority districts, the figures argue, would reduce the representation that Black voters would have in the state legislature.

That is the basis of a new lawsuit that will be filed Monday by Attorney Nabih Ayad. According to Ayad, the new maps violate the voting rights act.

The commission initially approved maps for Michigan's congressional district, as well as the state house and senate on Dec. 28, following months of debate over how the lines should be drawn.

Former Rep. Sherry Gay-Dagnogo was one of many figures in Detroit politics that leveled criticisms against the Michigan Independent Redistricting Commission's maps that were approved last week. During a press conference Monday, she was joined by other colleagues in announcing a lawsuit against the commissions.

The revision is expected to evenly balance the state's political representation.

RELATED: Michigan's new political maps point toward 7-6 split in favor of either party

It was widely expected that litigation from Black legislators and potentially Republicans would come following the map's approval.

In Detroit, the maps eliminated two majority-minority districts that favored voters of color. That decision drew criticism from lawmakers from the city.

However, legal counsel for the commission has argued that the group had no obligation to redraw the lines with majority-minority standards.

When new maps are approved by Michigan's redistricting commission, there could be a legal battle.