Detroit man critically injured by speeder in front of home

Aaron Dome was pulling into their driveway off Lakewood Street on Detroit's east side when a speeding truck rear-ended him last week. The driver was going double the speed limit.

"It was the most frightening and nightmarish sound that I've ever heard," Summers said. "He was slouched over, unconscious, bleeding profusely from his head and my first thought was he is not going to live. It was the scariest moment of my life."

Dome was pulling into their driveway off Lakewood Street on Detroit's east side when a speeding truck rear-ended him last week. The driver was going double the speed limit.

"We have said it's only a matter of time before someone gets hurt and the fact is has to be the biggest advocate of street safety, is heartbreaking," Summers said.

Dome is in intensive care with a traumatic brain injury and a litany of injuries.

"It is literally a race track," Summers said.

Over the years Dome compiled video, and reported hundreds of speeding drivers to the city, mayor's office, and city council.  He's been begging for speed humps on the cut-through street between Jefferson and Kercheval.

"And what we keep hearing is that we don't qualify for speed hump because we are not proximate to a park or church," Summers said.

The city's road engineering department installed speed humps in 4,500 locations based on the number of kids on the street, reports of excessive speeding, and traffic count. But Lakewood Street is not on the list, yet. 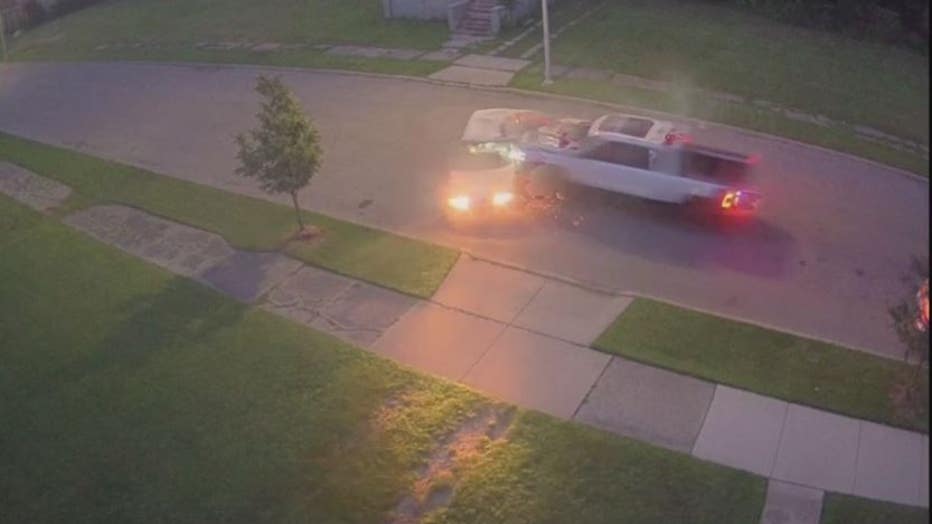 Video still of the crash that injured Aaron Dome in Detroit.

"We have been actively monitoring that strip of the street," said DPD Capt. Rebecca McKay, 5th Precinct.

Detroit police say it is out there. The day Dome was hit, DPD issued 15 citations on that strip of the street by their house.

"The police department has done what we can to thwart the speeders along this area of road and we will continue to do that as much as we possibly can," McKay said.

For Aaron Dome, it's just the beginning.

"He's squirming, moving his fingers," Summers said. "The prognosis is good, it's just going to be a really long road to recovery."

"This accident, along with recent DPD traffic enforcement, further demonstrates that speeding is a major public health concern citywide.

"Our review of the request for speed humps on this block of Lakewood determined it was not eligible under the 2021 program due to it not meeting the minimum requirements for housing density, number of children living in the area, and crash history.

"However, DPW continues to monitor traffic concerns and will revisit the Lakewood request in light of this updated information."