DETROIT (FOX 2) - A father is still reliving the moments he received a phone call that his son's house on Evergreen exploded with him and four others inside.

"I don't think anyone is getting any sleep right now," said Kevin Mundy Sr. "When I got the call, I thought he was dead."

His 36-year-old son, Kevin Jr, was badly burned recovering in a nearby hospital.

At this time Detroit fire officials are only calling the incident a natural gas leak.  But say the source of the ignition is still unclear.

But this father is not just heartbroken, he's also very upset.

"From me and my family to DTE get on your job," Kevin Sr. said. "If you can have computers and all this technology then it should be sensors to sense a gas leak."

On Monday DTE had workers at the site of the explosion. FOX 2 reached out to DTE and in a statement the company says:

"Our thoughts go out to the victims and we are working with local authorities to investigate. We have not received any recent reports of natural gas leaks or suspected leaks at this home, or in the immediate area."

But as the investigation continues, this father believes his son is not at fault.

"If gas is somewhere leaking from the underground to the house, the kids didn't do that," Kevin Mundy Sr. said.

Kevin's father is hoping that metro Detroit will support his son who lost everything.

"He needs some help bad, we're not materialistic," Kevin Sr. said. "He lost everything."

If you would like to help the victims of the house explosion go to the family's GoFundMe page.

"This is a situation we will never forget," Kevin Sr. said. "It will be with us for rest of our life." 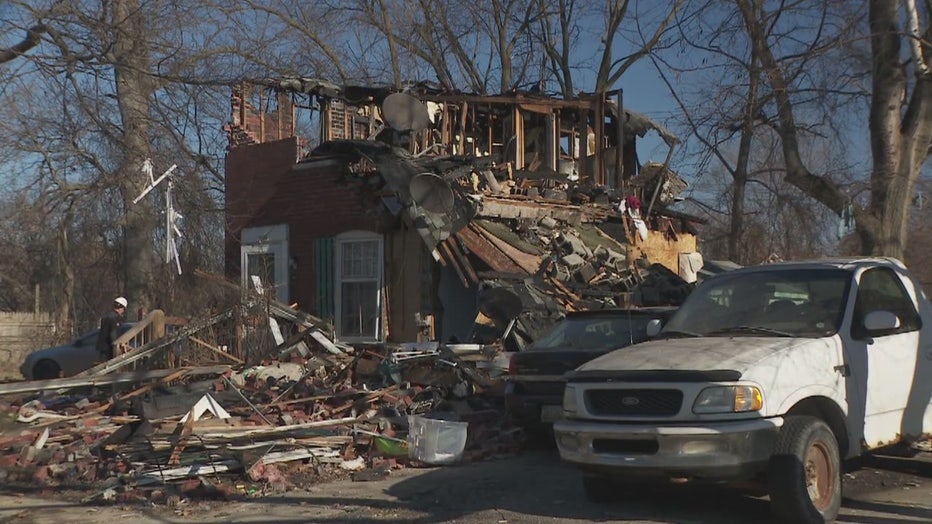 The full statement is below:

DTE Energy was called to the scene of a home explosion on Evergreen in Detroit Saturday evening. The cause of the fire is still unknown, and we are working with local authorities to investigate. Our thoughts go out to the six adults who were injured in the incident.

Safety is our top priority. Our crews immediately cut gas to the residence and made the surrounding area safe. Out of an abundance of caution, our team also conducted leak checks in the immediate area and did not find any. We have not received any recent reports of natural gas leaks or suspected leaks at this home or in the immediate area.

DTE focuses on maintaining the safety and integrity of our system of underground natural gas pipes through a robust program of inspections, maintenance and upgrades. We urge all residents, in any situation, if you smell or suspect a gas leak to leave the area at once, call 911, then call DTE at 800-947-5000 (or your natural gas provider), to report the situation.