Seven people were shot and one is in critical condition after a shooting on Detroit's west side during a candlelight vigil.

DETROIT - Seven people were injured by gunfire Sunday night after someone open-fired into a crowd on Detroit's west side.

A gathering of about a hundred people had congregated near Asbury Park and W McNichols around 10 p.m. for a candlelight vigil when the shooting had occurred. One person was in critical condition while the rest of the victims were expected to be okay.

The severity of the crime prompted the Detroit police chief to visit the scene and offer an update early Monday morning.

"We found a number of different shell casings in the area so it's possible there was some return fire, but we just don't know enough right now," said chief James White. "But we're in the process of looking and finding out."

White also plans to give a press conference later Monday with an update on the investigation.

Police are currently looking for two vehicles: a lime green Camaro and a black Chevy Tahoe.

"They need to be put away," said Chantelle Edwards, one of the victim's sisters. "That's the evil spirit right there. People are mourning and you come in and do something like that."

Law enforcement says the suspect shooter was in the Camaro that witnesses say open fired on the gathering. The Tahoe's relationship to the scene is unclear at this time, but police say it was seen speeding away from the area at the time of the shooting.

The people had gathered at the intersection Sunday night to honor the victim in a crash that was killed Friday night. Sean Edwards, 36, was killed when he lost control of his dirt bike.

"Going to be pulling video all night, identifying what we can get video feeds from. It happens to be a green light location where the incident occurred, so we'll be pulling that video," White said. "We'll also be working with the business owners in the area to pull additional video or any homeowners that have video that we can use to identify the perpetrator." 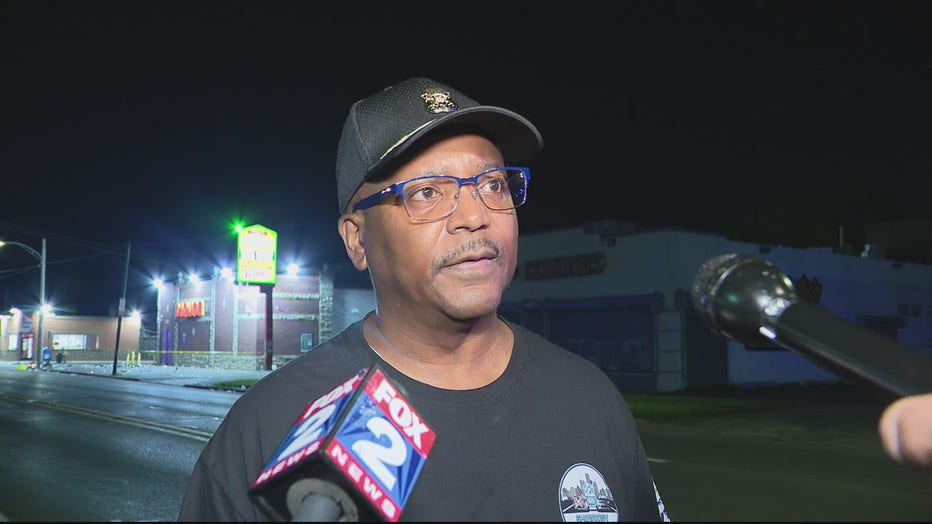 Police want the public to be on the lookout for both of the vehicles. There could be possible gunshot holes in the side of the Camaro since someone may have struck the vehicle while returning fire during the shooting.

If anyone knows anything about the location of the vehicles, they're asked to give Detroit police a call.