DETROIT - Rosey White says it happened at nighttime when she was kicked out of her home more than four years ago.

Detroit police are reviewing policy relating to how their officers approach landlord-tenant disagreements after one woman and her kids were wrongfully kicked out of their apartment. Activists are encouraging others to speak up about their own experiences as well.

Falsely labeled as a squatter by her landlord in late 2016, White says she was the victim of a lie that was perpetrated by law enforcement who forced her out of her home.

"I had nowhere to go and I ultimately ended up homeless because of it," she said.

"What I’m telling y’all is real talk right here. I didn't write no speech down, this real life. I lost everything I owned. It took me years and I’m still rebuilding," White said.

Speaking with anger in her voice and a megaphone in her hand, White incanted to a crowd of protesters Sunday about the pain her eviction caused her and the damage that remains.

While it was White who was telling her story, many of the demonstrators in attendance had been spurred into the Michigan cold because of the woman beside her. Whitney Burney was illegally evicted with the help of police in December, just days before Christmas. Her story was amplified by activists from Detroit Will Breathe and the Detroit Eviction Defense who argue the policies deployed by police aren't working. 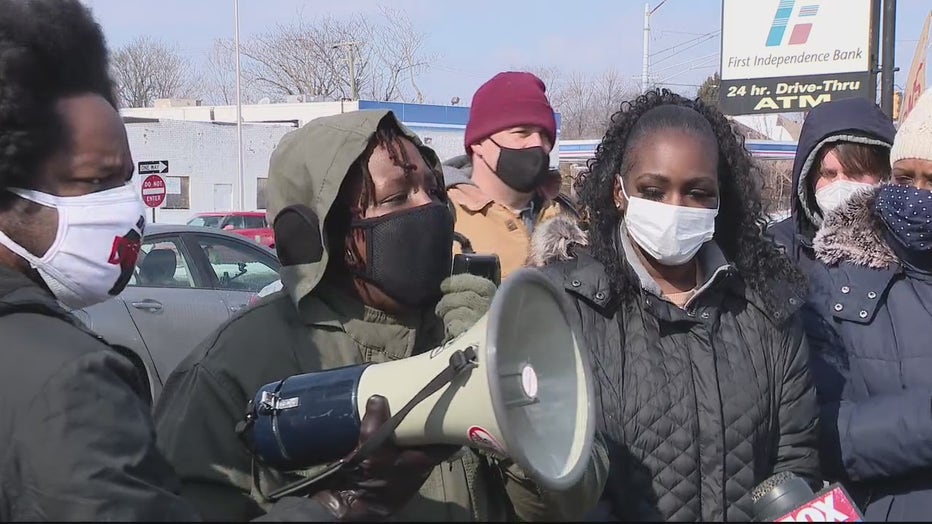 Rosey White, who claims she was illegally removed from her home four years ago, speaks at a protest about wrongful evictions.

A single mother of four kids, Burney's former landlord had lied to Detroit police about her status as a tenant. An apology from the police came later in January after further details of the case were voiced.

"With a little bit more investigative work, the officers could have readily found out that she was in fact a tenant," said Detroit Police Assistant Chief Todd Bettison, who spoke with FOX 2 on Sunday. "If we mess up, we readily admit that and in the case of Ms. Burney, what we have is landlords that are misrepresenting their tenants as squatters."

Along with an apology, Wayne metro has paid for Burney's hotel stay, provided her with three months of rent for the home she's in now, paid her late DTE bill and her children received laptops. Police also said she would be compensated for the property she lost.

"Me and the kids are in a better place and moving on with life and I just want to appreciate everything that everyone has done for us," said Burney.

Burney's case may not be the only one and police say they are revising their eviction policies to ensure future instances don't happen either, despite it working most of the time.

Part of the issue, Bettison says of Burney's case, was the officers were given bad information. However, all officers in the 10th precinct where the incident occurred are also being retrained. Police policy is also being stressed to new recruits in their legal update training.

"And that also with our whole entire department - when they go through their annual 40-hour training, that’s going to be a part of their legal update in curriculum as well," said Bettison. "Chief Craig has stated publicly and to our officers as well, that we don’t do civil evictions. That’s just something that we don’t do. You think about the vast majority of cases, we get it right."

Bettison says the department has even stopped landlords from illegally convicting tenants since many renters also call for help.

A spokesperson for Breathe Detroit called on the officers involved in Burney's case to be fired.

Outside the department's 10th precinct on the weekend, demonstrators said a policy change needs to be accompanied by more forceful penalties for officers that disobey the rules.

The officers involved in Burney's case will be disciplined, Bettison said. However, what that looks like is unclear as the case is still working its way through the system. The landlord is also being held accountable.

Officers are also looking into White's case. She said her numerous attempts to reach out to police and city officials have fallen on deaf ears ever since she was kicked out in late 2016.

"It was at nighttime, I had nowhere to go, and I ultimately ended up homeless because of it," said White. "The landlord - I don't know if he threw away my things or sold my things, but they were all gone."

A spokesperson for the city also says they would be willing to help her if she has housing insecurity.

Activists are asking others to step forward if they've been subject to similar dealings with their property managers and police.

"If you’re in a situation where you've had an illegal eviction, speak up and speak out. We got you," said one man.

The Detroit Eviction Defense is looking for anyone with similar stories. You can contact them at https://www.detroitevictiondefense.net/