Ramzu Yunus, who has touted that homes in Detroit are free for years while handing out fake deeds, was arrested in early September after shooting at a private security guard and then holding police at bay but he may never face charges for shooting that the guards.

DETROIT (FOX 2) - Ramzu Yunus kept Detroit Police at bay for several hours in early September after he fired gunshots from inside his home as he was about to be evicted. He eventually surrendered to police and was released a few hours later. Now we've learned he may not face charges.

Yunus has been handing out fake deeds to Detroiters for years. He was at the Detroit City Building Tuesday to tell people he can hook them up with free homes that "they're entitled to". Those allegedly free homes don't belong to him, they belong to the Detroit Land Bank or private owners.

On Sept. 1, Yunus was arrested after an attempt to evict him from a house on the city's west side where he was allegedly squatting when private security tried to get him out of the home.

"Of course we answered back with gunfire," he said. "If you try to stop the political will of the people's human rights of Detroit, we are going to shoot, we're gonna have air power, whatever power we have at our disposal," he said.

After firing the gunshots, he barricaded himself inside the home for several hours before eventually surrendering peacefully. He was released within 48 hours.

Sources tell FOX 2 the private owner of the home where he was squatting never filed eviction paperwork in court. When private security breached the door, Yunus was technically defending himself, sources said, and he may not face charges.

"We are at war with anyone who opposes and tries to stop us," Yunus said.

He and his armed colleagues are back out on the street and claiming that people have the right to just take homes by any means necessary.

A spokeswoman for the Wayne County Prosecutor's Office says the warrant for assault with intent to murder was returned to Detroit Police for further investigation but there was no comment on why. 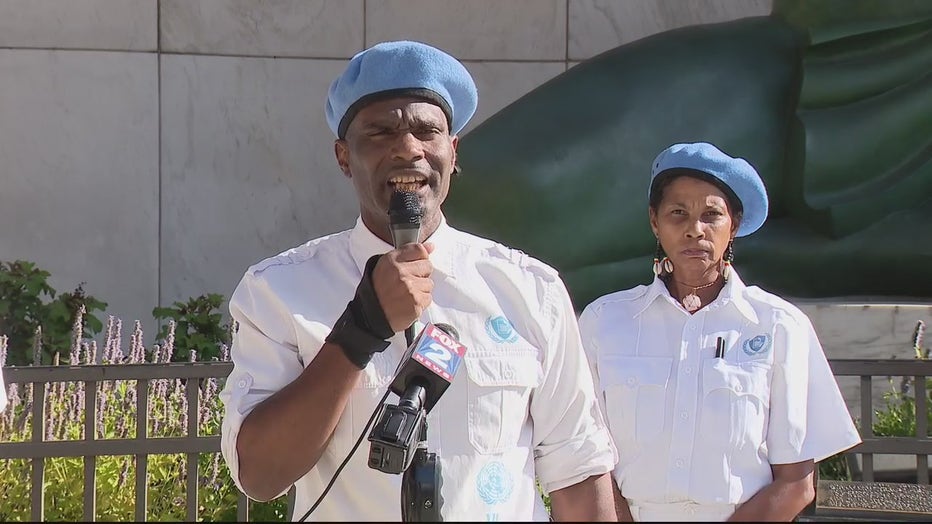 Ramzy Yunus speaks in front of the Spirit of Detroit.