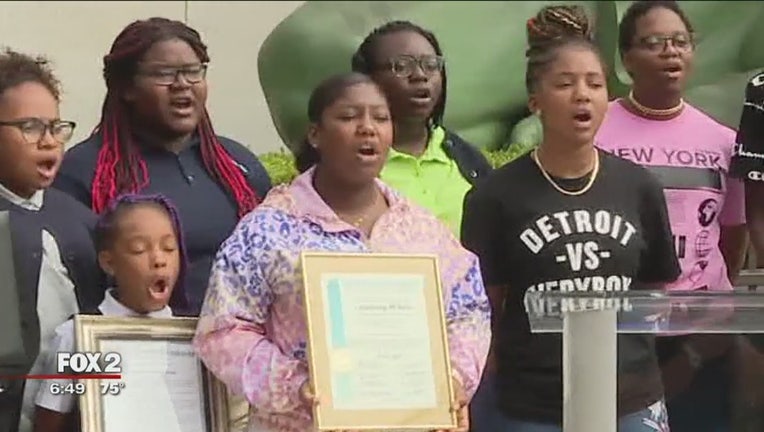 The City of Detroit honored the Detroit Youth Choir on Wednesday in front of the famed Spirit of Detroit.

The kid's voices and talent that were showcased on the national stage on TV - and carried them to a second place finish on America's Got Talent - were on display where they received some pretty prestigious awards.

"This feeling that we all have, I don't think it's ever gonna wear off," said Madison Parks. "Never gonna come down off of this."

On Wednesday, the choir and its director Anthony White were presented with several honors including the Spirit of Detroit award.

They came so close, but the Detroit Youth Choir came up short in the America's Got Talent competition. Second place ain't bad though, and they're still first place in the hearts of Detroiters. After receiving a $1 million endowment from local business leaders and Detroit-based foundations last week, they were awarded Wednesday with the Spirit of Detroit award.

"I feel amazing because we showed that there's positivity in Detroit and that there's not always negatively around," said Symone Nunnelly.

"We are honored that you exemplify the Spirit of Detroit in your hearts and are power role model, mentor, and visionary that continues to sow into the development of our youth. We continue to bless you and all of your endeavors," said Jenee Ayers, a Detroit City Council member.

But that wasn't everyone who was present at the ceremony on Wednesday. The deputy executive director of the Detroit Public Schools was also in attendance.

"We are really proud of you and we just want to say go on, keep representing and let the world know that the arts are alive and well in Detroit," said Anthony Smith.

The recognition has ushered in a new era of the arts in the city. The choir's leader said they are bringing quite a few more people, doubling their ranks.