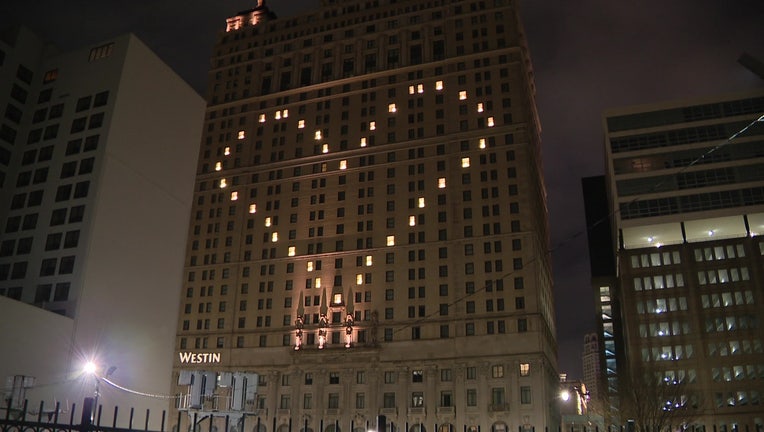 It's been three weeks since Michigan Gov. Gretchen Whitmer issued her 'Stay Home, Stay Safe' order. People, for the most part, are staying home and following the order. At Detroit's Book Cadillac, they want you to know they stand with you.

The iconic Detroit hotel lit up their rooms in a heart shape Tuesday night, displaying the heart across 13 of the hotel's 31 floors.

The message is simple: "Our hearts stand with Detroit".

Detroit and Wayne is the epicenter of the COVID-19 outbreak in Michigan with the virus claiming 405 lives and almost 9,405 cases as of Tuesday afternoon. There are a total of 18,970 cases in all of Michigan and 845 deaths.

The touching show of support from the iconic hotel shows that the city pulling together to get through COVID-19.

Book-Cadillac on Washington Boulevard in Downtown Detroit has been a part of the city's skyline for almost 100 years.

Opened in 1924, the hotel was where Lou Gehrig famously decided he would end his iron man streak of 2,130 games in 1939. The property changed hands several times between 1950 and 1980 and in the late-70s, it was losing so much money it was going to close until the city stepped in with the Detroit Economic Growth Corporation to keep it open for the 1980 Republican National Convention.

In the 1980s, the hotel was to be converted into a mixed-use property but costs soared, the city's economy sagged and developers came and went until 1986 when the contents were liquidated and it sat empty for 20 years.

In 2003, the city of Detroit announced a $150 million renovation deal but that, too, fell through when severe damage was found in the building.

Finally, in 2006, Westin Hotels bought the building and began a thorough revitalization. In October 2008, it finally reopened after a $200 million reconstruction project and now has 67 exclusive luxury condos and penthouses and 453 rooms.

To say the Book-Cadillac has survived is an understatement. So too will Detroit and Michigan.