Since January, Department of Natural Resource conservation officers retrieved eight dead mute swans from the lake, according to a release. Concerned residents told FOX 2 they questioned whether the swans were ingesting antifreeze or another form of poison. 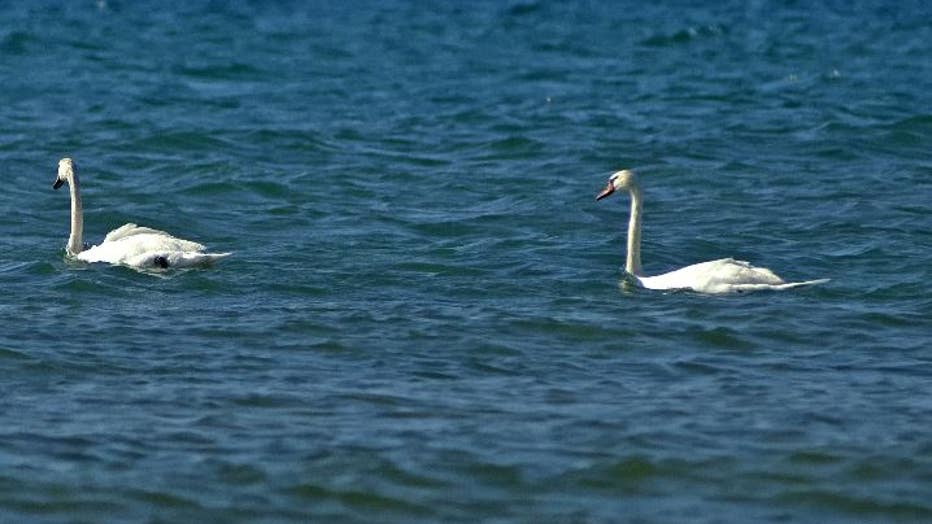 A pair of mute swans is shown on Lake Michigan at Leelanau State Park in Leelanau County. Credit: Michigan Department of Natural Resources.

Mute swans, identified by their bright, orange-colored bills, are an invasive waterfowl species in Michigan, known for being aggressive towards humans and native wildlife and destroying wetland habitat, the DNR said in a release.

"Invasive species or not, we take the death of these waterfowl very seriously," said Lt. Todd Szyska, DNR law enforcement supervisor in Detroit. "It’s not every day we come across groups of dead waterfowl, especially in residential areas."

Animal autopsies were performed on the three swans, the only salvageable specimens from the birds killed at the lake. Results indicated that a disease called Verminous Hemorrhagic Ulcerative Enteritis was the cause of death, the DNR said.

This disease of waterfowl is caused by a parasitic flatworm that is passed to birds when they ingest certain freshwater snails. In Michigan, the disease primarily affects mute swans. There are no known reports of human infection from this parasite, and it does not affect fish or other aquatic habitat.

"We can’t say for certain what caused the deaths of the dozen swans that died this past winter at the same location," said Thomas Cooley, DNR wildlife pathologist. "But with a previous history of this disease on the lake, and open water that was available to swans to feed on snails, it is highly likely that those birds died as a result of an intestinal fluke infection."

Cooley said mortality attributed to this disease has been increasing in waterfowl nationwide, and particularly in mute swans in Michigan, either due to an increased awareness of the disease or because of an actual spreading of the parasite.

The investigation revealed that a bubbler, used to maintain open water in the winter, was likely a contributing factor to the spread of the disease.

"Residents on lakes and marinas can legally use bubblers to maintain open water and prevent ice damage to docks and seawalls during the winter," Szyska said. "Other than creating weak ice, bubblers are not dangerous and do not create or spread disease. In this case, the bubblers likely provided the swans an open place to congregate and feed on snails."

To prevent nesting or to remove invasive mute swans, the DNR encourages public and private property owners to apply for a free permit that allows property owners to safely remove the nests and eggs, according to approved protocols established by the U.S. Department of Wildlife Services and the state.