DETROIT - “There’s not a lot of things that make my heart pound, but this was making my heart pound hard,” said Theresa Sumpter, the found of Detroit Pit Crew Dog Rescue.

There were intense moments, as crews tried to free a puppy that was stuck in debris for hours after the home explosion on the city’s west side.

Dog rescued after home explosion on Detroit’s west side

“I was extremely concerned that she would have sustained injuries that we wouldn’t be able to fix,” Stumper said.

The pit-bull, now named Miracle, was chained up outside, when her owner’s house exploded Friday evening, a natural gas leak is to blame.

Six people inside were seriously hurt and rushed to the hospital with severe burns.

During the cleanup, Detroit Firefighters heard a dog chain in the back yard and followed it, until they found the pit-bull.

Sumpter says she was covered in bricks, a toilet, her own dog crate. 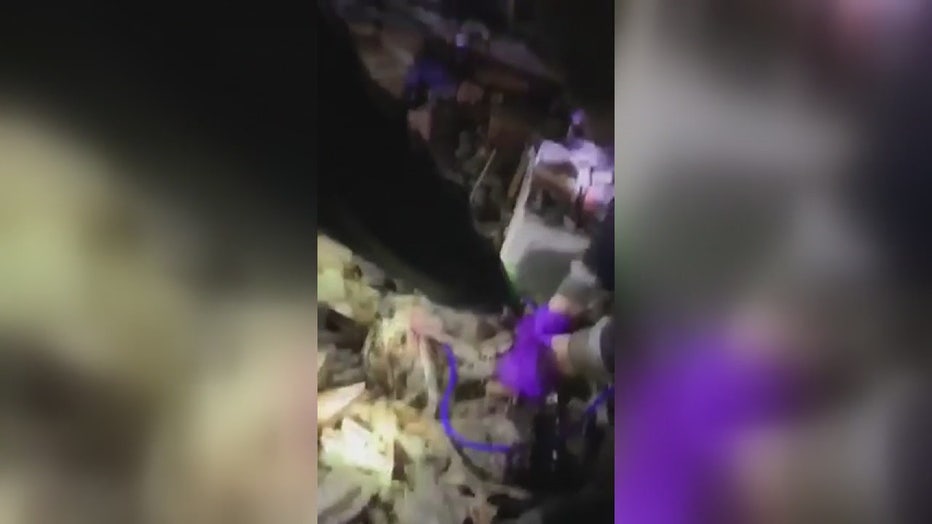 “It was amazing you had DFD, DPD, DTE, ATF and they were all working together feverishly,” Sumpter said.

45 minutes later, she was free.

“She came out of there wagging her tail like a star, this dog is phenomenal,” Sumpter said.

Amazinlgy, she came out with minimal injuries.

“She currently had a broken pelvis, but it won’t require surgery. She is expected to make a full recovery,” Sumpter said.

You would never know what this loving dog has been through.

“How did this dog survive this house explosion,” Sumpter said.

It appears a match sparked the explosion, triggering the leaking gas. The Detroit Fire Department is working with DTE Energy to do a full investigation at the home to pinpoint the cause of this leak.