Detroit Police said they were called by a neighbor who was concerned about the number of cars parked on the grass. They found dozens of cars and said it was part of an illegal chop shop.

DETROIT (FOX 2) - The Detroit Police Department raided an illegal chop shop on the west side Friday afternoon, seizing dozens of cars and arresting at least one person.

FOX 2 learned of the illegal chop shop, allegedly being run on Faust Ave, just north of Tireman Ave. as police were arriving on the scene.

According to police, police were responding to a citizen complaint when a neighborhood police officer discovered multiple stolen cars parked on the property.

The officer then called the Commercial Auto Theft (CAT) Unit to investigate. CAT officers arrived with a search warrant and found 15 stolen vehicles at the location.

One-by-one, they were towed by police and into evidence. It's a win for the CAT unit and commander Arnold Williams said they found dozens of cars.

One of the stolen vehicles was a camper that police said the suspect was living in. He's now in police custody.

The chop shop was surrounded by privacy fence with a home nearby. Police did not reveal much information but said they are investigating if the home owner knew what was going on.

Police said the call started as  call from another neighbor who was concerned about the number of cars parked in the grassy area. When police arrived, one thing led to another.

"The important part and the part I truly want to emphasize that the community spoke up. the community actually notified us. They said ‘it looks like something’s wrong here, can you come out and investigate?'"

Along with the cars, DPD also took a box truck full of power tools and found a stolen 9 mm handgun that was in plain view as they searched the truck. 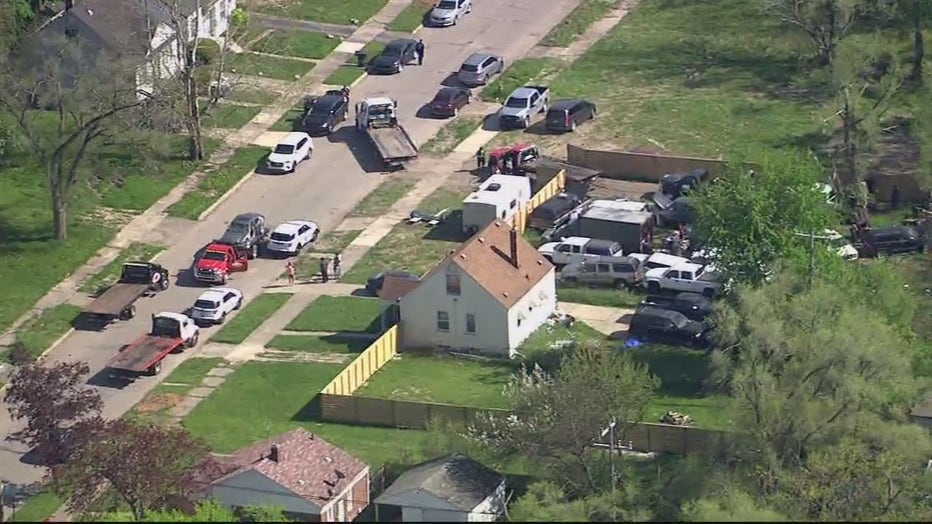