That young man ended up in the hospital with a broken foot. Now DPD is looking into whether the officers followed its policies.

DETROIT (FOX 2) - A Detroit police officer is under investigation after using his scout car to ram and pin a fleeing biker against a building, to end a pursuit.

That young man ended up in the hospital with a broken foot. Now DPD is looking into whether the officers followed its policies.

It happened as officers chased the 19-year-old suspect and a few others downtown last Thursday.

It all started near Huntington Plaza where police say four off-road vehicles were driving recklessly and doing stunts in the middle of the roadway. An officer tried to conduct a traffic stop — but all four riders bolted.

Police say the biker put the public at risk: Driving on the wrong side of Jefferson and on a sidewalk as officers tried to stop him.

He ended up with a broken foot when the cop in question struck him with his car.

"On the face of it,we don’t want our scout cars coming into contact, but I also don’t want to prejudge it until I’ve talked to the officers and we’ve done a thorough investigation," said Chris Graveline.

Graveline heads up the professional standards section and says they’ll be looking into why the officers chased the biker — the department’s policy only allows pursuits for violent crimes.

"What exactly were the officers ... what had they seen? What information did they have? And why did they feel the need to pursue this particular individual?" Graveline said.

"I’m not saying it was alright for him to run or not stop. I don’t know why he didn’t stop, I wasn’t there," Williams said. "But to see the police use their cruiser to push an individual into a building leaving him with a broken leg? C’mon, that’s a lot of liability."

The incident in question is the latest squabble in the Detroit police crackdown on off-road vehicles.

"We all want people to enjoy the use of their ATVs," Graveline said. "But they also have to follow the rules of the road - especially in these highly populated areas and in the neighborhoods. This can create very dangerous situations for our other citizens."

The officer in question who was behind the wheel is on desk duty. The young man he struck and was pinned up against the wall was arrested for fleeing and eluding police. 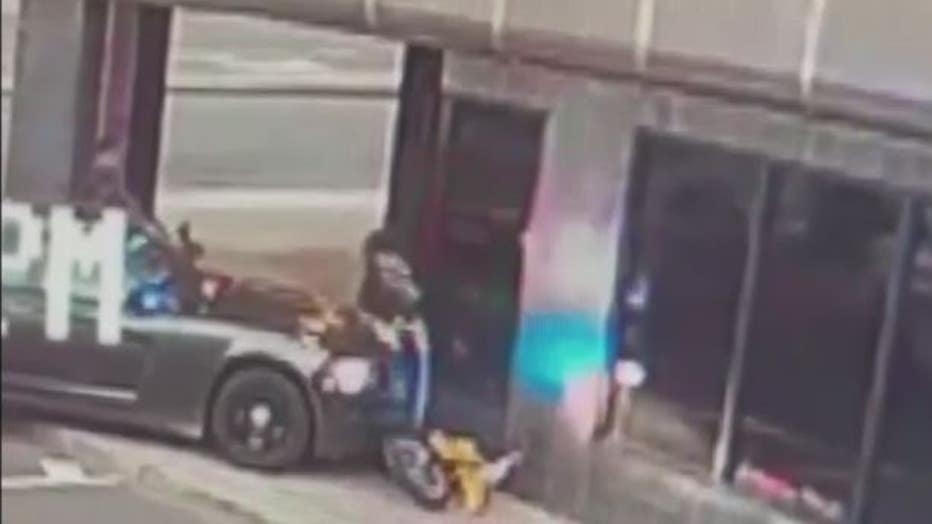