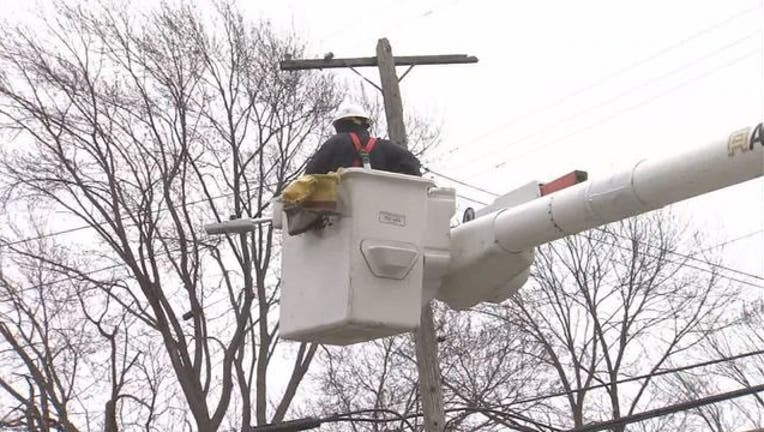 (WJBK) - About 75 percent of DTE customers who lost power in Wednesday's wind storm should have the lights back on by Friday night, DTE officials said at a press conference.

The wind knocked out power to more than 800,000 people. DTE says this is the "most significant weather event" in its more than 100-year history. Wind speeds reached more than 60 mph, which is near tropical storm-force speeds.

DTE said the restoration team is working 24 hours a day to restore power. Tha tincludes 1,500 line workers,  including 950 from out of state; and 1,000 tree trimmers, including 250 from out of state. DTE still plans to have power restored to 90 percent of the affected customers by the end of the day on Sunday.

Temperatures are expected to dip into the teens tonight. Officials have set up warming shelters in cities throughout metro Detroit. To find out near you, visit www.empoweringmichigan.com.

DTE expects to have roughly 90 percent of customers restored by the end of the weekend. The outages are widespread across the region, with the hardest hit areas in Wayne, Oakland, Macomb and Washtenaw counties.

Hundreds of line workers and tree trimmers from out of state have joined the restoration effort.

As of 11:30 a.m. Friday, Consumers Energy is reporting 94,000 customers are still without power after restoring about 200,000 of 311,000 customers. Wednesday's winds brought down nearly 8,200 wires and broke more than 1,100 poles, according to a spokesperson with Consumer's Energy.

Consumer's Energy customers can now sign up to get outage alerts and restoration times sent to a phone, email or text message, Text 'REG' to 232273 or visit: www.ConsumersEnergy.com/alerts. Customers can also, report an outage, check the status of an outage and get useful tips what to do before, during and after a storm by visiting www.ConsumersEnergy.com/OutageCenter.

"Typically we see winds of over 65 miles per hour it comes with a tornado, it comes with a thunderstorm - that did not happen Wednesday," he says. "These types of events have only happened about 14 times since 1941 around here. When I say the type of events I'm talking about a low pressure area that brings winds of upwards of 60 miles per hour and one of these events might stand out in the historical context was the sinking of the Edmund Fitzgerald.

"It was a very, very similar setup. A strong low tracked over northern Michigan over Lake Superior sunk that ship. They had max winds of 86 miles per hour. Yesterday ours about 68."

Customers have three ways to contact DTE during an outage. Customers can report an outage, check on the status of an outage and view an outage map from their smart phones using the DTE Energy Mobile App, which is available free of charge from the Apple Store or Google Play. DTE encourages customers to use the website at dteenergy.com as well. Customers can also call DTE at 800-477-4747 to report power outages or downed lines.

Storm Tips:
•         Never drive across a downed power line. If a power line falls on your vehicle, remain inside until help arrives.
•         Always operate generators outdoors to avoid dangerous buildup of toxic fumes.
•         Turn off or unplug all appliances to prevent an electrical overload when power is restored. Leave one light switch on to indicate when power is restored.
•         Don’t open refrigerators or freezers more than absolutely necessary. A closed refrigerator will stay cold for 12 hours. Kept closed, a well-filled freezer will preserve food for two days.
•         If a customer is elderly or has a medical condition that would be adversely impacted by a power outage, they should try to make alternative accommodations with family or friends.