A handful of people gathered across the river to watch the building come down around 9 a.m. On social media many said they could hear and feel the implosion, with some saying their whole house shook.

The implosion took only seconds and officials have said it should leave a minimal impact.

But neighbors have told us they are still concerned about lingering effects, such as decreased air quality or damages to their own properties.

DTE officials say they have been addressing safety concerns well in advance of the demolition. Brian Nuno with DTE tells us they've been removing hazardous materials from the plant for many months now. Officials will be monitoring the air quality in the area afterwards as a precaution, and continue that through late February or early March.

You'll notice one wall is still standing after the implosion, and officials say that was done on purpose to keep a buffer of sorts during the explotion process. Everything eventually will come completely down. 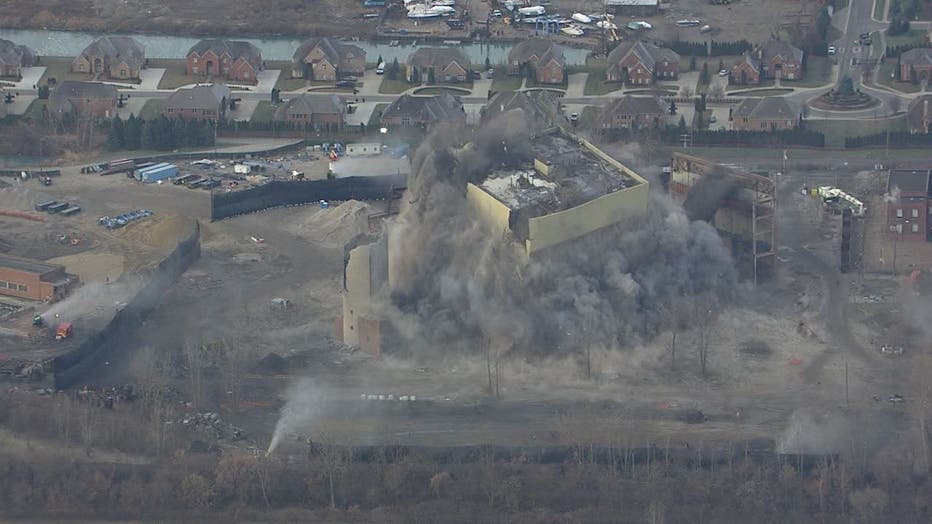 Conners Creek power plant has been vital to the growth of Detroit. It dates back to 1915 when it first went online, and it wasn't retired until 2008.

The land will now become part of the expansion for the new Fiat Chrysler Jeep plant.

Several retired workers from the plant gathered across the river on Belle Isle to watch the implosion Friday morning.

A group of retired workers at DTE's Conners Creek plant gathered to watch the building implosion.

"It was bitter sweet. It was like, whoa, it's gone already. It was just a big cloud of dust it went so fast it was pretty amazing," said Don Fleishman. He started working at the plant in 1979.

"A lot of history. When you work at a place off and on for 20, 25 years you develop a lot of friends and some of my friends to this day are from that plant," said John Campbell. "I was here when the Seven Sisters went down and it was a slower process, a bigger plant that went down. This plant just kind of dropped."

"It was a good plant but the best thing about the plant - I mean the building is gone - but the people. We just have so many good memories of the people we worked with," Fleishman said.