Reality is about to hit hard for those involved in pockets of property damage around East Lansing following Michigan State's thrilling win over Michigan Saturday.

EAST LANSING, Mich. - While the revelry in East Lansing was raucous following Michigan State's big victory over the University of Michigan, all things must come to an end.

And when it did, several incidents of property destruction and mini fires were reported to East Lansing police. The department is now looking for the suspects involved in the cases of couch burning, car damage, and other incidents that jammed up traffic.

The ELPD responded to 57 calls involving fires around East Lansing alone, the department said on Facebook. That's in addition to the 142 calls for service it got elsewhere.

Some revelers celebrated with vandalism in East Lansing to celebrate the Michigan State 37-33 victory over Michigan Saturday. Credit: The State News via Storyful

"It is unfortunate that this post needs to be made, but we need your help. We are reaching out to the public for assistance with identifying suspects responsible for the destruction of property after the MSU vs. UofM football game on 10/30/2021," read the post on Tuesday morning.

In total, the police and fire department reported 349 calls for service to aid with crowd control as firefighters attempted to extinguish the fires.

"This behavior is not acceptable, and suspects identified will be located and held responsible," continued the post.

Officers plan to look over social media posts, tips, and other info over the next few weeks to identify suspects involved in the destruction, the post added.

The department asks if someone knows the identities of any of the subjects, or have any other videos or pictures, to please submit them to Detective Sgt. Adam Park at: apark@cityofeastlansing.com. He can also be reached at (517)319-6834 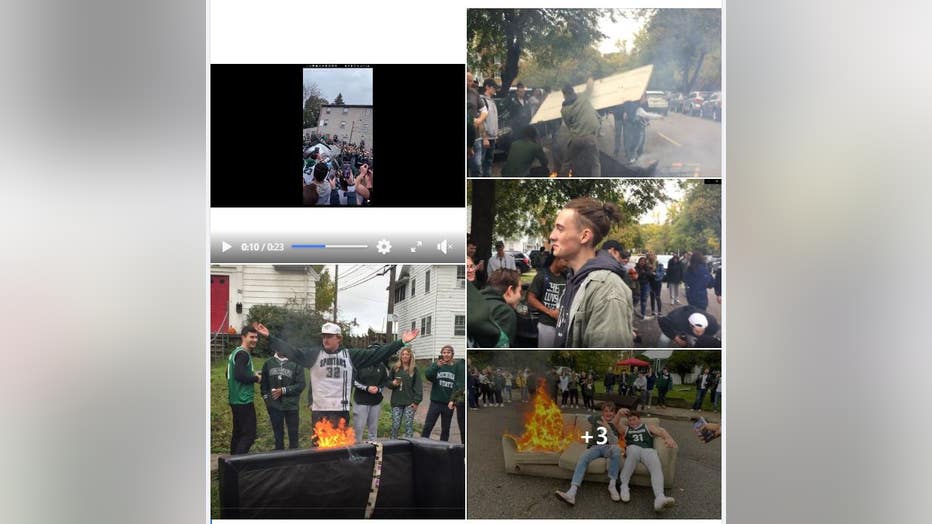