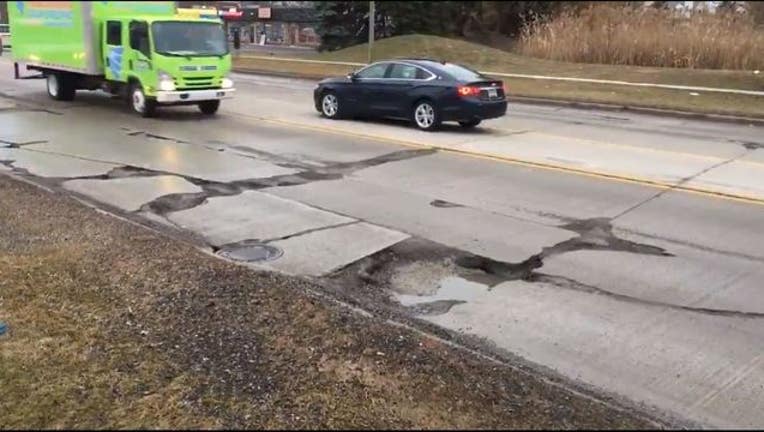 Roop Raj is a reporter and anchor at FOX 2 Detroit. Like you, he's sick of dodging potholes and needed to vent his frustrations. The following is an editorial on the condition of Michigan roads:

Congratulations Michigan. We are now a state in which English has been ruled our official language by the state House of Representatives. That was a legislative priority that passed this month as you were dodging potholes and shelling out hundreds to fix your tires.

So we can all agree that, in English now everyone, our roads are A-W-F-U-L.

It stuns me that the legislative priorities seem to be as unstable as the road to Lansing.

From I-96 to the Lodge, the most apparent sign of government neglect isn't just something we read about or see on TV. It's something we drive on daily. And it's bad. Very bad.

Our future rides not on mass transit, tech, autos and an amazing manufacturing sector that comes from a spirit of creativity and imagination. It rides, instead on our roads.

Just last month, 5,000 journalists from across the world were in Detroit to write about the North American International Auto Show. Thank goodness our roads were frozen and filled with snow as they wrote about our region. As these writers and newscasters shuttled into Cobo, they got a slippery yet smooth ride into our freshly renovated convention center.

Nice articles were written about our city's comeback. Ink dried. We smiled. They went home.

Then the thaw happened and the craters opened up revealing deficiencies. Problems so severe, if they were personal health issues, we'd only tell close family members about them.

This epidemic, however, is no longer to be shared just among family. It's an ailment that begs the question, "why the hell didn't you get this checked out years ago?" Or, "it's time to see the doctor. Why did you neglect your health?"

The doctor said it would be okay, we explain. Our caretakers, our lawmakers, are wrong.

It wasn't okay to neglect the issues then. It is more critical than ever to address now. If the roads were your body, you'd be on intensive care and your family would be demanding the best of care to not bandage, but to  find a permanent fix.

If you were in the ICU and your doctors offered a manicure and haircut, you'd roll your eyes and fire them. Neglect, you'd cite.

Making English the official language of Michigan at a time the roads are crumbling seems about as logical. Have you written, in our newly deemed official language, your gripe to your caretakers? I am about to and encourage you to do the same. It's time for a second opinion.

Find your representative and call them now - and make your voice heard.

Find your senator and call them now - and make your voice heard.

Roop Raj is a reporter and anchor at FOX 2 Detroit. If you have breaking news please call (248) 552-5103.  Email him your story ideas, follow him on Facebook, and track him down on Twitter to tell him what you think.