Some Flat Rock residents feel they did not get the answers they needed about a chemical leak during a townhall addressing the issue. Another is being held.

FLAT ROCK, Mich. - Environmental monitors plan to use a mobile unit with a million-dollar detection instrument in Flat Rock to determine if there are any outlying concerns over the Flat Rock gas leak that happened last week.

The EPA's truck arrived Tuesday with plans to sweep through the hundreds of homes that were part of an area of concern after a benzene leak from the nearby Ford assembly plant that was first detected in late August.

Using a hose connected to the truck, monitors will check different parts of homes to look for elevated levels of three different chemicals.

"We're be taking a hose and move it inside from place to place. The sample will get drawn back and we'll get an update signal every second," said Dave Mickunas, a chemist with the EPA.

Officials believe they have stopped any more of the flammable chemical from entering the city's sanitary sewer supply, announcing only trace amounts of Benzene were being detected Tuesday.

However, in order to remove any uncertainty, the truck will start monitoring people's homes Wednesday morning.

"We've used it all over the country. From hurricanes to deep water, Enbridge, and vapor intrusion," Mickunas said, speaking during a news conference in front of the truck Wednesday.

Also in attendance was Congresswoman Debbie Dingell (D-Dearborn), who said she had been in contact with an EPA administrator and said the time of greatest concern regarding the leak had come and gone. 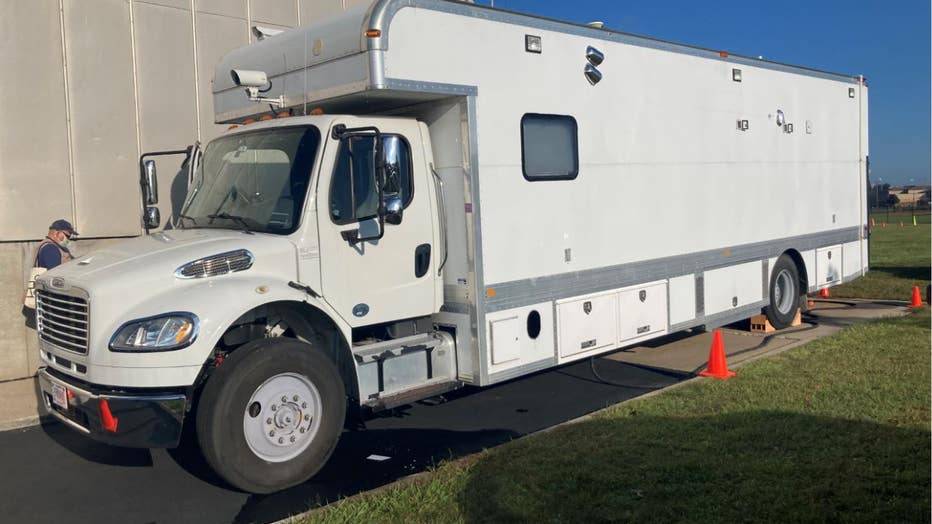 The EPA's mobile lab will use a trace atmopshpheric gas analyzer to detect chemicals inside people's homes.

Firefighters have continued to flush out the system to remove any excess amounts of the chemical. There are no immediate concerns to public health, environmental monitors say.

But hundreds of precautionary evacuations were ordered around the city last week when a state of emergency declaration was made in Wayne County.

Residents upset about the incident and looking for answers went to the city council meeting Tuesday night, giving members an earful. Representatives from Ford and the EPA were not present at the time.

The EPA will be using its mobile laboratory to get a more complete sense of any potential benzene still in Flat Rock's sewers after a gas leak last week.