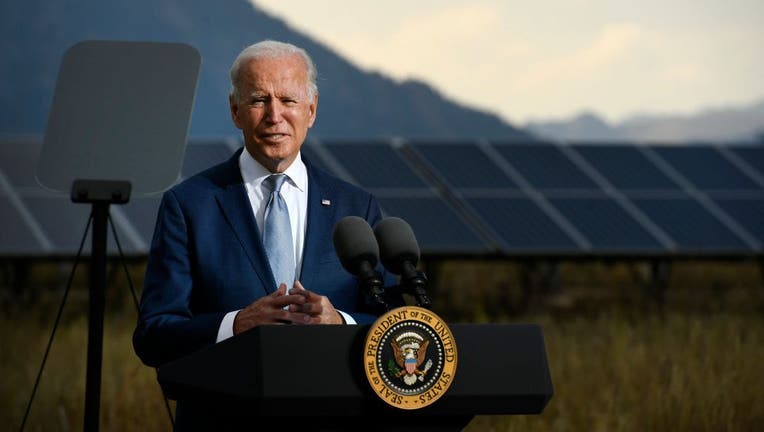 WASHINGTON - Boasting about his $1 trillion infrastructure package, President Joe Biden overstated its reach by claiming it would result in 500,000 electric vehicle charging stations and meet his pledge to nudge half of U.S. drivers into EVs by decade’s end.

The measure receiving final congressional passage late Friday cuts in half the money that Biden had said was needed for the charging stations. Money could start flowing to the states within a month after the bill is signed, although construction can’t begin until the Transportation Department approves their spending plans.

While a step forward, automakers have made clear they won’t meet White House targets that half of all new car sales be electric by 2030 based on federal investment in that legislation alone.

A look at the claims vs. the facts:

BIDEN: "We’re going to build out the first-ever national network of charging stations all across the country — over 500,000 of them. ... So, you’ll be able to go across the whole darn country, from East Coast to West Coast, just like you’d stop at a gas station now. These charging stations will be available." — remarks Saturday.

THE FACTS: Not so much.

The legislation, which awaits Biden’s signature, provides $7.5 billion in federal grants to build a national network of charging stations. That’s less than the $15 billion originally cited by Biden to pay for the half a million charging stations he promised during the presidential campaign.

The International Council on Clean Transportation, a research group, for instance, says the United States would need 2.4 million electric vehicle charging stations by 2030 if about 36% of new car sales were electric. In 2020, there were about 216,000.

New chargers should be located based on models that predict where they will be needed, such as along travel corridors for people going long distances, as well as in areas where people spend lots of time, such as hotels, apartment building parking lots and even along public streets, says Jessika Trancik, a professor at the Massachusetts Institute of Technology who studies EV charging.

Direct current fast chargers, which can charge a car up to 80% of its battery capacity in 20 to 45 minutes, are quite expensive, costing $40,000 to $100,000. So those should be placed where people need to charge quickly and get back on the road.

Chargers that run on 240-volt electricity similar to what powers a clothes dryer are far cheaper, around $2,000. But they take around eight hours to fully recharge a car, which won’t be as feasible along a highway.

The White House has acknowledged the infrastructure bill alone will not be enough and has said it will use "all the tools and resources available" to cover Biden’s half-million target, such as with existing loan and investment programs at the Energy and Transportation departments.

But striving toward a goal is not the same as a promise that Biden reaffirmed Saturday.

Half of car sales will be electric

BIDEN: "Auto companies made a commitment they were going to make 50% of vehicles electric by 2030." — remarks Saturday.

JENNIFER GRANHOLM, secretary of energy: "The auto industry itself has said that they want half of their fleet to be electric, new vehicles sold by 2030." — interview Sunday on CNN’s "State of the Union."

THE FACTS: That’s overstating it.

While Biden in August did sign an executive order setting the nonbinding target, major automakers actually only agreed to a goal of 40% to 50% of new car sales being electric, depending on the amount of federal investment.

The automakers including the "Big Three" — Ford, General Motors and Stellantis, formerly Fiat Chrysler — say a substantial shift to EVs by 2030 can only happen with incentives for electric vehicle purchases, adequate government funding for charging stations and money to expand electric vehicle manufacturing and the parts supply chain.

While the infrastructure bill provides for EV charging stations, automakers are also banking on passage of a $2 trillion, Democrat-only spending bill that was put on hold Friday in the House as progressives and centrists work out issues over cost. That measure also is expected to face changes in the Senate.

The spending bill would provide up to $12,500 in credits to consumers off the price of an electric vehicle, including $4,500 if the vehicle is made at a unionized factory such as General Motors and Ford. That provision has drawn protests from Tesla and non-domestic automakers like Toyota and Honda, which produce many of their cars in the U.S. but have workforces not represented by a union, saying it will make it harder for them to sell EV vehicles.

Only 2.2% of new vehicle sales were fully electric vehicles through June, according to Edmunds.com estimates. That’s up from 1.4% at the same time last year.

When states see the money

BIDEN: "They’ll see the effects of the bill — this bill — probably starting within the next two to three months. As we get things — shovels in grounds and — in the ground — and people being told they’re going to be working doing the following things. And things are going to move. It is a bill that’s paid out over a number of years."

THE FACTS: He’s in the ballpark.

Once the bill is signed into law, for instance, about $1 billion — the first year of $5 billion of the $7.5 billion in EV funding over five years — is to be distributed right away to states based on a federal formula, which should happen within two to four weeks, said Jeff Davis, a senior fellow at the Eno Center for Transportation.

Still, under the legislation, states won’t be able to spend the money until the Transportation Department sets out its criteria for EV buildout plans and approves plans submitted by states — a process that could take up to six months.

According to that Federal Highway Administration formula, larger states will be the big winners of the $5 billion federal payout. Texas would get $407 million, California would get $383 million, Florida $198 million, New York $175 million, and Illinois $148 million. In contrast, Vermont’s allocation is $21 million, and Puerto Rico’s $13 million.

Separately, there is a $2.5 billion competitive grant program over five years that will give the federal government discretion to award money based on strategic needs in building out an EV network. The first of that money could take up to a year to be distributed as the program is set up.

"We want to fill that out, so rural areas, poorer areas have access to the (electric) fuel that’s necessary," Granholm said Sunday.

Davis said in terms of infrastructure projects more broadly, "starting in April 2022 or so, you will begin seeing many, many formal announcements of significant new grant announcements selected by the transportation secretary from a pool of competitive applicants — highways, transit, railroad, port, airport, gas pipeline, etc.."

"Most of these won’t be able to break ground immediately, but those are signs of progress," he said.