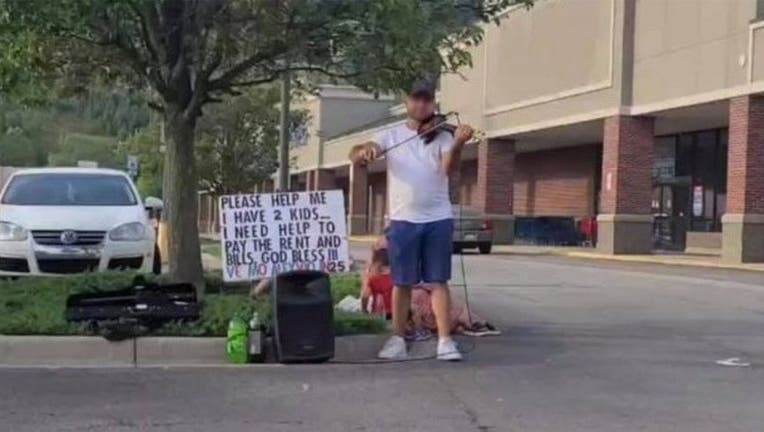 SOUTHFIELD, Mich. (FOX 2) - Over the past year, police nationwide have issued warnings about people who are setting up outside of grocery stores or other retailers with a sign stating they need some help. They're also playing the violin - or at least that's what it looks like.

The fake violin-playing scam has been going for as far back as 2020 but an Oakland County Township supervisor is reminding people in the area to think twice about it.

The scam works like this: near or even in the parking lot of the grocery store or retailer, there's someone set up with a violin and a sign about having kids and needing help to pay the rent.

The music is beautiful and, when accompanied by the sign about having kids and needing help, it can really pull at the heart. But this is all fake. The person standing with the sign isn't playing music at all. It's coming from a speaker.

Springfield Township Supervisor Laura Moreau shared a post earlier this week about the fake violin player scam. Moreau shared a link from FOX5DC and warned the city's "compassionate, big-hearted residents" not to get scammed.

According to Moreau, it was happening at the Kroger in Davisburg and said the people who taking part in the scam are "not your neighbors in need".

And this isn't new. Back in February 2020, a TV station in Texas reported on the scam.

Last fall, both FOX 5 DC and FOX 13 Tampa said it was happening there too.

"They stand outside stores and businesses as if they're playing the violin and they solicit donations from people as they're coming in and out of stores," explained Pinellas Park Crime Prevention and Community Policing Corporal James Gatti.

And earlier this week, WWMT in Kalamazoo actually caught it on video as a reporter confronted a violin player who stopped ‘playing the violin', yet the music kept playing. He claimed he didn't speak English.

Similar cons have been reported all across the country. Police in Florida said they believed the fake musicians are part of an organized group making lots of money by playing with people's emotions.

"There's many other places that you can give that hard earned money of yours to you, that it's going to actually go for what it's intended for, as opposed to somebody fooling you with what they're asking the money for," Gatti said.