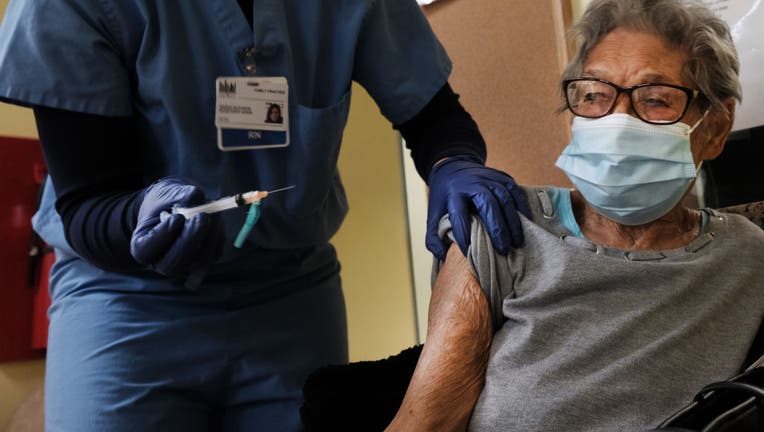 Luz Ortega receives a COVID-19 vaccination shot at a vaccination site at Stevenson Family Health Center in the Bronx on February 10, 2021 in New York City. (Photo by Spencer Platt/Getty Images)

The U.S. Food and Drug Administration has authorized Americans who are 50 years and older to receive a second booster of the COVID-19 vaccine from either Pfizer-BioNTech or Moderna.

The authorization makes millions more Americans eligible for a fourth dose. Currently, the U.S. urges two primary shots followed months later by a booster dose for everyone age 12 and older.

The second booster approved Tuesday for those 50 and up should be administered at least four months after the previous booster, the FDA said.

A fourth dose had only been recommended for people with severely weakened immune systems, who need three doses to begin with for the best chance at any protection. The agency said this especially fragile group also can get an additional booster, a fifth shot.

Hours later, the Centers for Disease Control and Prevention recommended the extra shot as an option but stopped short of urging that those eligible rush out and get it right away.

Numerous scientific studies have proven that booster doses of authorized vaccines help restore waning immunity and protect against serious COVID-19. Booster programs in countries including Britain, Canada and the U.S. have been credited with preventing the surge in omicron infections from spilling over into hospitals and cemeteries.

While authorities say the vaccinations continue to offer strong protection against severe illness, they haven’t held up as well against milder infections especially those due to the omicron mutant. With COVID-19 cases finally plummeting after the intense omicron surge, public health experts are starting to look ahead to what next steps might be needed — if a new variant crops up or, barring that, whether to try shoring up coronavirus protection in the fall at the same time people get flu vaccinations.

The U.S. booster campaign was based on evidence that the shots’ effectiveness, particularly against milder infections, was waning about six months after the last dose. Calls for a third shot grew once it became clear the vaccines weren’t as strong against mutants as they were against earlier versions of the virus.

While some early data left unclear just how much benefit another shot offered — or for how long — Pfizer said that an analysis of health records of more than 1.1 million Israeli seniors showed confirmed infections were two times lower and rates of severe illness were four times lower among those who got two boosters instead of just one.

An expert group convened by the World Health Organization also said it "strongly supports urgent and broad access" to booster doses of COVID-19 vaccine amid the global spread of omicron.

WHO said it is continuing to monitor the global spread of omicron, including a "stealth" version known as BA.2, which has been documented to have re-infected some people after an initial case of omicron. There’s mixed research on whether it causes more severe disease, but vaccines appear just as effective against it.

Cathy Stoddard and the Associated Press contributed to this report. This story was reported from Los Angeles.