LAKE ORION, Mich. (FOX 2) - In many ways Ryan Crue was like any other Lake Orion High School student - he enjoyed playing sports and hanging with his close friends.

"He was a scholar-athlete, he was on varsity baseball, we loved going to games," said his mother, Nancy Hatalsky.

Ryan Crue and his family say they are sharing the story to empower others on their journey to justice.

But in one way he was not - as an alleged sexual assault victim. It was something he tried to hide until the memories consumed him.

"I have some pretty good ones and I have some that are pretty haunting," Crue said.

Crue's life gradually began to morph from picture-perfect to dark and depressing. The downward spiral started in his junior year, the fall of 2014.

His Spanish classes with a young, popular and attractive teacher at the time he claims was the catalyst.

"It was after school one of the first times that there was any physical interaction that was incredibly inappropriate," he said.

Crue was 16 and Kate Boozer, 28, when he claims their relationship changed from student/teacher to something much more. 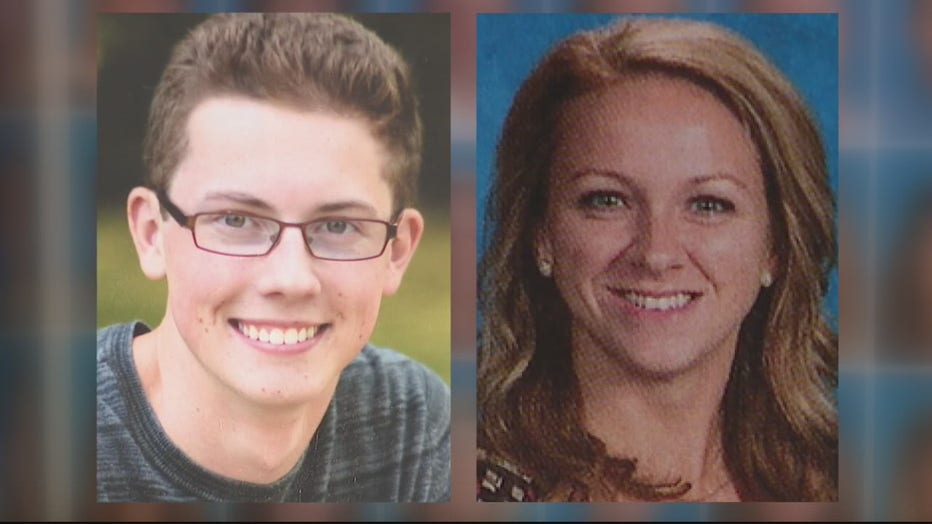 Ryan Crue, left, his teacher Kate Boozer who he claims had a sexual relationship with him.

He says they had some form of sexual intercourse 100-plus times and sometimes in Boozer's own class at school.

Crue says Boozer bought him gifts and he showed FOX 2 a card she wrote him and shared a cell phone call log from all hours of the night.

When Crue tried to suddenly drop her Spanish class his senior year, his mom immediately requested a meeting with Boozer and then with Lake Orion administrators. After that meeting, she said it just didn't feel right.

"Being a teacher I know what conferences are supposed to be like," said Nancy Hatalsky. "This from the get-go was red flags everywhere. She cried twice when we were with her."

There would be more appointments with school leaders in the weeks that followed as more alarming details started to slowly surface. 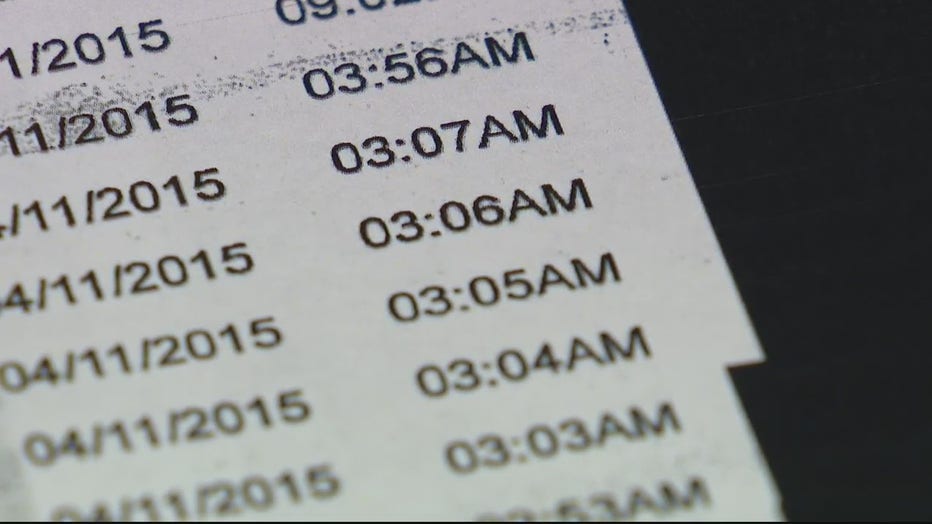 Crue's mother is an educator herself with more than three decades of experience. She says she didn't realize the gravity of the situation for years,  because her son refused to admit to it.

She had no idea the two actually had sex until long after the Lake Orion school administration allowed Boozer to resign, instead of firing her.

"It makes sense in a teacher-student relationship that the student wouldn't want to talk about it," said Dr. Sarah Kiperman, Beaumont behavioral psychologist. "First of all, there is a power dynamic there."

Kiperman works with alleged victims just like Crue. She has seen how difficult and draining this can be on them and the percentages prove it. 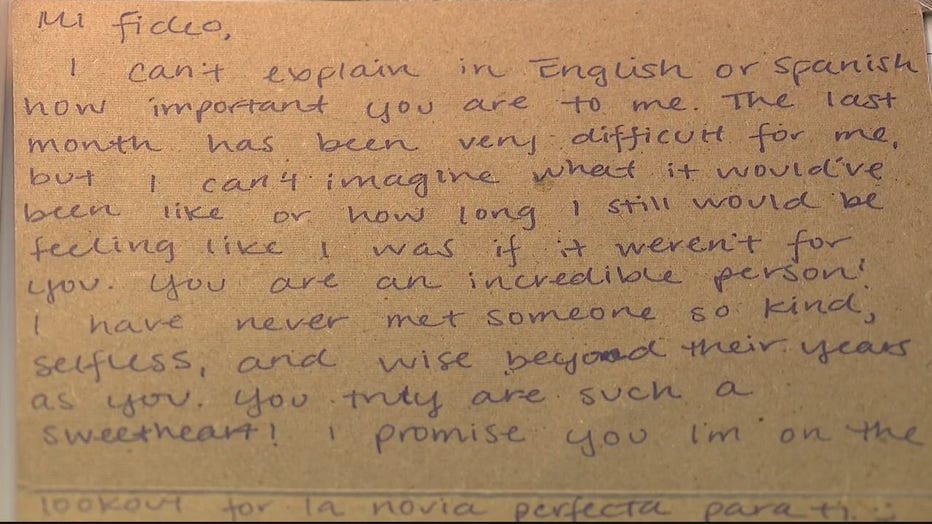 A note allegedly written by Kate Boozer that Crue's family claims was given to him.

Statistics show one in six men have been abused or sexually assaulted.

Many often remain silent due to the mindset that he must have welcomed it, he was lucky, and it can take years of therapy to find even pockets of peace.

"We expect them to be able to talk to us immediately and to be able to say what happened to them," Kiperman said. "But this is a really stigmatized experience that kids may not want to admit what they have gone through."

Lake Orion Schools declined an on-camera interview but did release a statement regarding Kate Boozer and how they handled the accusations.

"Lake Orion Schools promptly investigated the allegation at the time it was brought to the district including cooperation with the Oakland County Sheriff's Department. The employee has not been with the district since 2016." 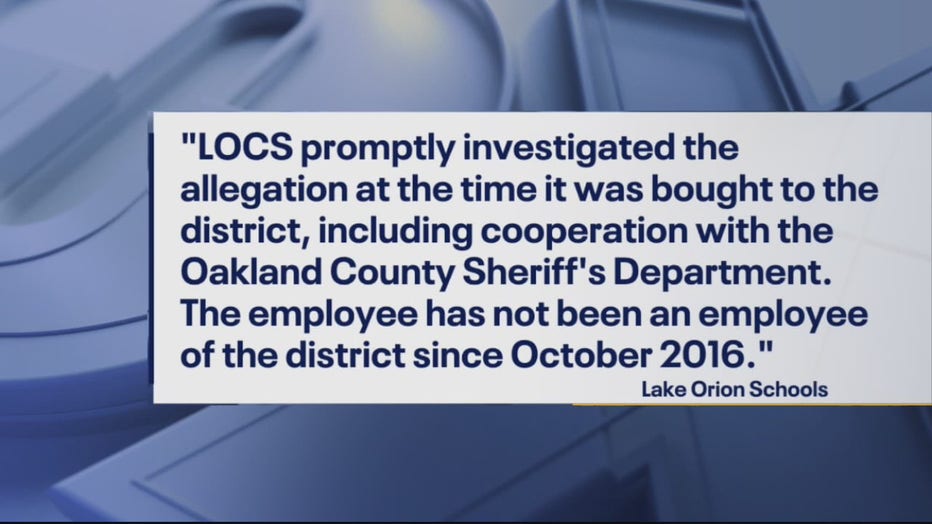 "I'm not going to speak for Lake Orion Schools as to why they didn't call us at that time," said Oakland County Undersheriff Mike McCabe. "It's my understanding they investigated, both parties denied it. So they didn't call us. The statute says they need to call us. We are the ones, law enforcement determines whether it's credible or not."

Records reveal the Oakland County Sheriff's Office found out when Crue's family went to them five years later. What the family divulged to FOX 2 during our many conversations is also detailed in the police report," McCabe said.

Crue tried to put the past behind him but during his sophomore year at Michigan State University it all came out. He could no longer cover up the anguish of the alleged abuse by a teacher.

His grades plummeted, he lost weight and he began cutting himself.

"My life felt like it was spinning out of control," he said. "I found control in unhealthy practices, self-harming, substance abuse. Things that don't help. anything but felt like at least I could control that aspect of my life at the time."

Ryan's friends noticed the scars, confronted him, then went to his parents to ensure he got help. His family's longtime worries were warranted.

"My first feeling was that I failed, you failed to protect your kid," Hatalsky said.

Since Boozer was never terminated from her job with Lake Orion Schools, she could be hired by another school district and have contact with other students.

Boozer and her attorney turned down requests for a sit-down interview, but did email a statement: 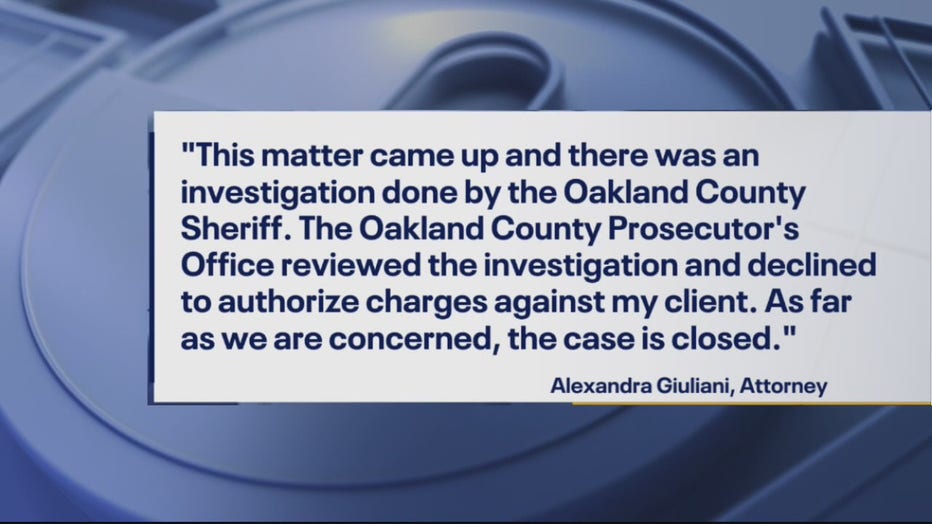 A pile of paperwork is now part of Ryan's parents' personal pursuit to get answers, to get some kind of accountability - when for so long the warning signs were right in front of them.

They just didn't see it and Ryan just wasn't ready to share it. Now he is, as showing his face is another part of the healing process. Perhaps more headway will come later.

"I feel like I have my feet back under me," Crue said. "But it's still a climb that is going to take years, but I'm back on the right path, and being able to speak about it and not being afraid to say 'I'm a victim of sexual abuse' is powerful."

The Oakland County Prosecutor's Office did review the case in 2019 but chose not to pursue charges. Ryan and his family refuse to give up though. they are hopeful it will get a second look in the not-so-distant future.

FOX 2 will keep a close eye on their journey for justice.