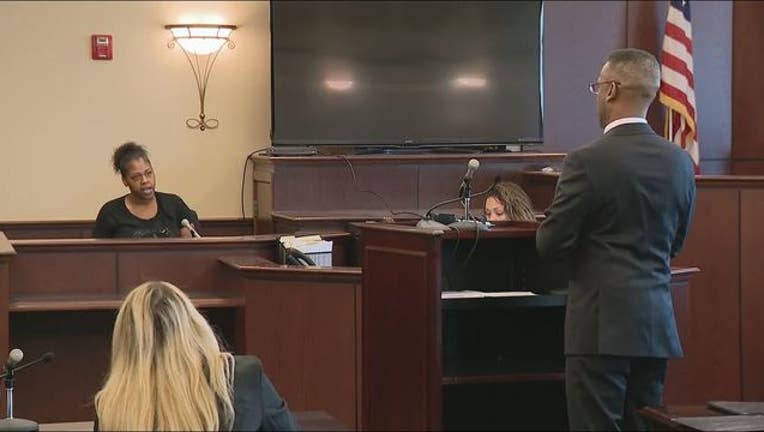 DEARBORN HEIGHTS, Mich. (FOX 2) - A woman revealed in court Wednesday what lead to a Burger King parking lot fight that ended with her being hit by a car -- while she was nearly 9 months pregnant.

The driver accused of hitting a pregnant woman with her car after a fight in Dearborn Heights in late June appeared in court Wednesday for a preliminary exam, as that pregnant woman took the stand.

Police say around 11:20 p.m. June 29, Dearborn Heights police responded to a fight a Burger King parking lot in the 20400 block of West Warren. Someone standing nearby in the parking lot started recording as two women started pummeling another woman sitting in the driver's seat of a black SUV. One of the women seen throwing the punches and hurling insults appears to be very pregnant.

The fighting ended and the two women start walking away, and the woman in the car aggressively backs up the vehicle. She accelerated and slammed into the pregnant woman, then took off.

During Wednesday's court hearing, the woman pregnant at the time testified. She said that she went to the Burger King that day to pick up her daughter, who called her for a ride because she was upset. She went to address her manager, Ladonna Boatwright. They had issues previously, which is why the woman says she stopped coming to the restaurant.

"I was familiar with her attitude," she said.

With her daughter in her car, she testified she saw Ladonna walking to her vehicle and pulled up next to her, cutting her off. She said Ladonna told her to get out of the car, so she did.

"We were in the parking lot, face-to-face talking. The conversation started getting a little aggressive. Ladonna turned around, she walked to her vehicle. I did follow her to her vehicle," she said. "I wasn't done saying what I was saying."

She said Ladonna hit her with the car door twice.

"Next thing I know, my daughter just jumped on her."

The daughter had gotten out of the car.

"I tried to grab my daughter, I tried to stop her, but I couldn't. I was pregnant -- I'm getting knocked into the door. You hear me in the video yelling Deja stop," she said.

She testified that Ladonna swung back, that she swung at Ladonna. Nobody was hurt during that time, she said. Both stopped, and they turned to return to the vehicle, as Ladonna remained in her car. That's when she said she heard people screaming, including her daughter and some witnesses. She turned around to see her daughter on the ground.

"While I'm looking at my daughter on the ground, Ladonna is reversing her vehicle, and I just froze," she said.

She said she was then struck by the front of the vehicle, so fast she didn't have time to move.

"The next thing I remember I just saw a bunch of people standing over me," she said.

The woman said she was in the hospital for three days, suffering minor injuries and the baby, who has been born since the incident, was not harmed.

The daughter also took the stand, adding some new information, including why she believes Ladonna was upset with her -- an issue with a timer at the restaurant.

"She said, 'I should smack you,' when she was yelling at me about the timer," she said.

She testified that during the rising tensions in the situation, her mother threw a drink on Ladonna.

Judge David Turfe bound the case over to circuit court on all charges. While he said there's the case of the instigator and the retaliator, he said there's an old adage, "A person in a vehicle must keep that vehicle under control at all times."