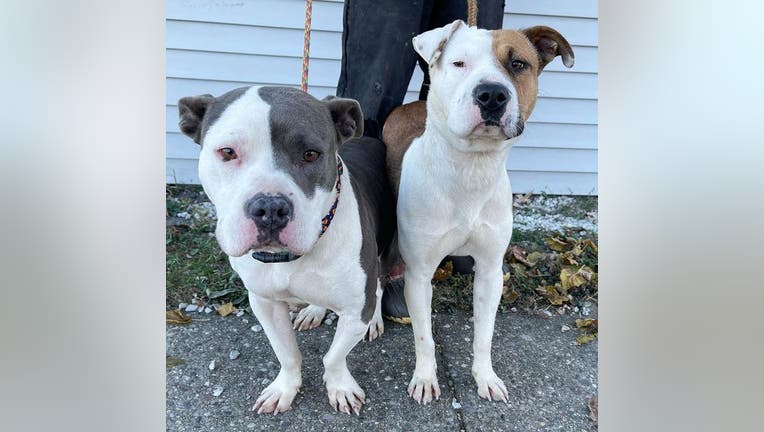 Willow (left) and Darcy were found next to their deceased owner. Photo via Rebel Dogs Detroit Facebook group.

DETROIT (FOX 2) - Two dogs need a foster family for the holidays after their owner was found murdered and no one in the family wanted to take care of them.

The two dogs, named Willow and Darcy, were found next to their owner who was found deceased by Detroit police this week. A nonprofit called Rebel Dogs Detroit was called to take in the two pups while more stable housing could be secured.

"There was not a single drop of dog food, water, or anything in the house for these two. The electricity was out, and the house was freezing," read a post from the group.

Detroit police were performing a wellness check at a home when they found the owner who was "likely murdered," Rebel Dogs Detroit said. "These two girls loved their human so much that the police had get creative to pull the poor dogs away from the body that they were so heartbreakingly unwilling to leave."

Efforts were made to get in touch with family of the victim, who said they did not want the dogs.

Animal control and other local shelters around the city also declined to take in the two dogs.

According to Rebel Dogs Detroit, despite the dogs going through the traumatic event of losing their owner, they're sweet dogs and well-behaved.

Like so many other shelters in the area, Rebel Dogs Detroit said they are over capacity and "out of options" unless they can find someone to care for the dogs.

To learn more about how to foster Willow and Darcy, go to rebeldogsdetroit.com/becomeafoster to learn more.