FOX 2's Jessica Dupnack just returned from a trip to South Africa and her plane landed in Detroit just a couple hours ago. We wanted to check in with her to see what her travel experience was like.

FOX 2 - The coronavirus outbreak is creating some tense travel conditions around the world.

FOX 2's Jessica Dupnack just returned from a trip to South Africa and her plane landed in Detroit just a couple hours ago.

Before she came back to work, Jessica said she called the Oakland County Health Department and spoke to an epidemiologist. She was told that she was not at high-risk for exposure based on where she traveled. They did not recommend a quarantine at this time.

We wanted to check in with her to see what her travel experience was like.

FOX 2: "What was your flight like, what kind of precautions were taken?"

Dupnack: "It feels so good to be home, there is a lot of uncertainty especially in Europe. I was traveling in South Africa, I had a layover in Amsterdam. From Capetown to Amsterdam and I got a text mid-flight that the president was banning some flights out of Europe so we had no idea what to expect when we landed in Amsterdam and were able to get some of those details."

FOX 2: "Luckily you're an American citizen and that ban does not apply to you. But what about the other passengers? Were they wearing gloves or masks, did you talk to each other or avoid contact?

Dupnack: "I don't want to say business as usual, but the dramatics that maybe I expected when I landed in Amsterdam, were not so much. There were some dramatics at the gate. A lot of Americans that were worried about that ban and maybe the ban being strengthened over the next couple of days. There was one passenger I talked to, he had just landed in Amsterdam from Detroit. He landed there, booked a ticket right away to come back to Detroit. He just wasn't taking any chances. A couple other people I spoke with, decided to just fly into Detroit even though that wasn't their final destination into the U.S. They just wanted to get back here and figure it all out. There was some panic, more so with the Americans that I spoke to.

"The flight a couple days ago we were on was not full. By the time the ban went into effect it was completely filled up. They had to bring more food on, and as far as safety precautions, a lot more masks were in Europe, I did notice, (on) a lot of passengers and both personnel at the airport. All the flight attendants on board, they did have gloves with them when they were serving food and that kind of stuff.

"They did say when we landed, the CDC would have to check in. I didn't know exactly what that meant, if they were going to come on and take temperatures or anything like that. But the CDC employee did talk with the flight attendant for a few minutes. They came over the loud speaker and said you guys are free to go." 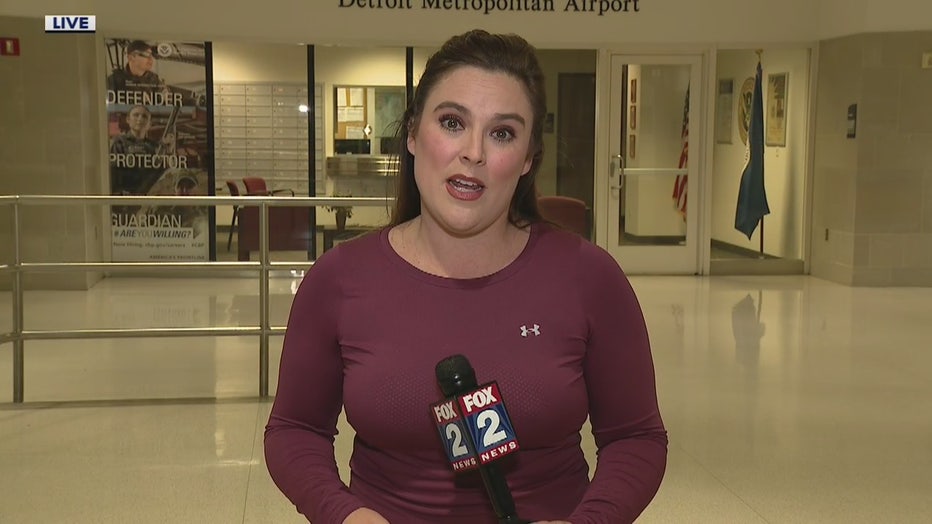 FOX 2: "At no point in your travels home did you have your temperature taken at any of the airports?"

Dupnack: "The only time (our) temperature was taken was 10 days ago when we landed in Capetown before we had to hand over our passports to immigration. They took our temperature but at no point in time was my temperature taken here in the U.S."

FOX 2: "What about fear of the virus in South Africa? Was that noticeable?"

Dupnack: "A couple of cases in South Africa were reported, but they were luckily on the other side of the country from where we were at. It was definitely a conversation in Cape Town, a melting pot. with people from all over the world there. Everybody was talking about it, but people were on vacation, trying not to think about coronavirus. But you definitely saw people taking more precautions in regards to wiping down, sanitizing, just those little extra things that the CDC is telling people to do.  But unfortunately you talk but staying six feet from people, it is really not feasible when you are on an airplane or in an airport."

COVID-19 symptoms may appear in as few as two days or as long as 14 days after exposure to the virus.

As positive cases have trickled in, state officials have adapted to prevent the further spread of COVID-19 while planning on boosting the number of testing.

On Tuesday, Gov. Whitmer confirmed the first two cases in Michigan after testing found a woman from Oakland County and a man from Wayne County, both with a history of travel.

A third case was confirmed around 6 p.m. Thursday before increasing to 12 by the end of the night. Their locations include

An adult female from Ingham County

Two adult females and one adult male from Kent County

An adult female from Montcalm

One adult female and one adult male from Washtenaw County

An adult female from Detroit

An adult male from Washtenaw County

An adult female from Wayne County

An adult male from an unknown location

While the number of positive cases being reported is small relative to states like New York, California, and Washington, the last two recording deaths, Michigan's positive case count is expected to increase. While the constant shifting numbers of those tested rises, officials argue that's a good thing.

RELATED: Track the spread of COVID-19 with our interactive map

Symptoms of COVID-19 may appear more slowly. They usually include fever, a dry cough and noticeable shortness of breath, according to the World Health Organization. A minority of cases develop pneumonia, and the disease is especially worrisome for the elderly and those with other medical problems such as high blood pressure, obesity, diabetes or heart conditions.

Right now there's one big difference between flu and coronavirus: A vaccine exists to help prevent the flu and it's not too late to get it. It won't protect you from catching the coronavirus but may put you in a better position to fight it.

To protect yourself, wash your hands well and often, keep them away from your face, and avoid crowds and standing close to people.