A beloved member of the FOX 2 family is back from the hospital recovering at home. Maurielle Lue talks about her battle with COVID-19 and shares her personal story.

DETROIT (FOX 2) - Maurielle Lue is home and resting but is also ready to tell her story after she caught COVID-19 in March, spent 10 days in isolation, before calling a hospital for help. And it’s a good thing she did.

Maurielle talked with Huel Perkins on Thursday for Let it Rip to discuss the fight of her life - which she won. But she’s stressing that other people her age not to let their guard down because this virus was, frankly, terrifying.

Over the past few weeks, Maurielle and Huel have talked as she’s fought the virus. Now that she’s back at home, she’s ready to talk. 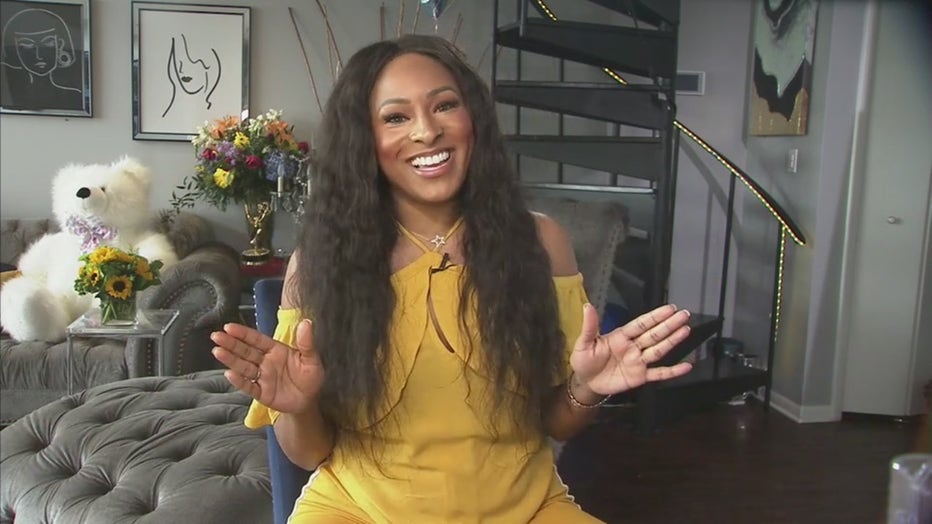 "I don’t look like what I’ve been through. I feel so good!. It is so good to be seen, first of all, because there is such a mental component when you deal with COVID-19, especially when you have to be hospitalized. The love, the well-wishes, the phone calls from my FOX 2 family and from viewers definitely got me through. It got pretty scary," she said on Thursday.

The unknowns & the fear

"I don’t know for sure. I know Oakland County will be working on the contract tracing on that part. I will say that it was only the week before I got sick that I said, you know what, I’m ready to get out a little bit. I don’t want to call it COVID-fatigue because I’ve been very safe. I’ve worked from home for a year, I very rarely left my house. I moved all of my grocery deliveries to all online. I’ve been very safe. The week before, I said ‘you know what? I can be safe and still go out and enjoy time with my friends. I went out for drinks in Birmingham once for 30 minutes," she said. "I had to work the next morning and I was in and out. I didn’t even get food. I had a food delivery the day before and then I turned in my car lease. Between those three very short encounters, COVID-19 came to my door."

While she was treating her symptoms at home, Huel recounts talking to her on the phone and she was wheezing and could barely speak. That was just a few days before she was in the hospital. Maurielle said that wasn’t even the worst part as she recounted the moment she realized she needed medical intervention.

"The fear (was the worst part), especially being here alone. I had a positive diagnosis just, like, three days before my birthday so I’m already devastated. I’m following all the CDC rules and guidelines. I was quarantining inside my house for 9 days. On day 10, when the CDC would say you could go back out and rejoin society, that’s when I really started to feel worse. My fever started to spike, it hit 103, and then the next day, Monday, it was 104. I was home and I started to hallucinate. I knew something wasn’t right. I also felt like it was too dramatic of a step to call 911. It was not something I thought I ever would have to do. There’s a mental tennis match and then you get sick enough and you’re like ‘where’s the phone?’ So I called 911, I get to the hospital. I’m thinking maybe I’m dehydrated. I start to feel better immediately when they give me fluids and then they say ‘oh no, baby, you can’t go anywhere. your vitals are off the charts, not in a good way, you have, it looks like double pneumonia, and your fever is so high, there are other dangers as well. so you won’t be leaving anytime soon’. I didn’t expect that. I really thought I’d be home that night."

Maurielle recounted the moment in the hospital when the steroids started to affect her mentally. She told Huel she saw her hands and legs looked purpled, a side effect of the powerful steroids she was on.

With her doctors and nurses trying to keep her calm, Maurielle said the hallucinations were temporary and the stay in the hospital was 'uphill from there, she said.

When the news of Maurielle’s time in the hospital became public, the staff at Providence Novi had to give her a 'codename' of Sunflower.

"That really is a testament to the love of the folks at FOX 2 as well as the viewers. Once the news broke - which I don’t know how that happened either - that I was in the hospital, viewers started calling and kind of laboring the system a little bit," she said.

"They came to me and said 'we're gonna put you in a different program, something that they already offer. They said 'we can't let people know that you're here'," she said. "I don't want to take care away from anyone else. so they came up with the name Sunflower. I guess Beyonce may have been taken. I'm not sure, I'm not picky."

Maurielle said she may be wearing a lot more yellow moving forward, which she did in Thursday’s appearance with Huel, but says the name of Sunflower has even more meaning to her.

"I got to do a little research about sunflowers and, Huel, it really, really spoke to me on a spiritual level. Sunflowers find the sun and they stand strong and they are relentless. They have such a spirit and they are known to be a flower with a spirit. imagine that. they fight. That's what I did. I fought," Maurielle said.

Home but the battle isn't over

While she’s home, she’s not symptom-free. Maurielle said she actually thinks she had COVID before it was declared a global pandemic and had long-hauler symptoms for the past year. She said in February of 2020, she was in New Orleans for Mardi Gras when she felt ill - worse than the flu. But that doesn’t compare to what she just went through.

"This was a completely different strain than what I experienced before. Now the long-hauler symptoms that you speak of, what I thought was bad, paled in comparison to what I’m dealing with now. different breathing machines, I’m perfectly healthy. I was doing hot yoga in 100+ degrees 2 or 3 times a week. I never know when I’ll go back to that," she said.

Now that she’s home, Maurielle has a couple of inhalers to help get her lung strength back but she still has battles she needs help with - like taking out the trash or taking her French Bulldog for a walk.

"There are absolute ripple effects that you don’t even think of. I thought I’d be out of the hospital, I’m home, and then you kind of get back to normal," she said.

With the third wave of COVID-19 here and targeting younger people than ever before, Mauriell’s urging everyone to slow down and rethink what we’ve known about the virus as the new strains act differently - as she can attest.

"This new strain is so much more transmissible and so much more dangerous. The doctor told me in the hospital, even though they didn’t test to see exactly which strain I had, my symptoms lined up with what’s coming into the hospital now. The doctor told me that this new strain lies dormant in your body for longer and then activates. I had COVID19 for ten days before I felt the need to go to the hospital. That last week was the worst week of my life - absolutely. the worst illness i have ever had to deal with but I was nursing my own self back to health with baby aspirin and Mucinex and orange juice for ten days. That’s it. Not knowing I had double pneumonia and my potassium levels had dropped and I was actually in danger of having a heart attack. It’s not worth it," she said.

To the viewers and fans: thank you

As for all the viewers who have called or messaged words of support for the young anchor, Maurielle wants them to know how grateful she is for them all and that this experience has changed her.

"There is no way I can say thank you, other than to say that. I am someone who plays better with a chip on her shoulder and I had really convinced myself, especially in the racial climate that we’re in - if we’re honest - I was reading a lot of terrible comments and people will say terrible things to me often and I’ve convinced myself, you know, it’s me against the world, nobody cares, nobody likes me. I’m going to do my job to the best of my ability, I’m going to speak my truth and that’s it. And I was overwhelmed with the instant love and support and people bringing things up to me at the hospital to do my hair. I went to the hospital with nothing. people brought toothbrushes, hair, gel, dyes, nail polish, crossword puzzle books. I could never say thank you to all of the people who cared enough to let me know that they were thinking of me. That absolutely changed me as a person, as well. You don’t always have to be the one with your back up against the wall. You can open up and give some hugs when covid says that’s okay to do. and receive the love because it’s absolutely out there."