For perspective, Jessica Dupnack is 5 feet tall – and this stack of trash is much taller than her, and wider. Neighbors say it’s been sitting here for a week and a half in front of a vacant house in an east side Detroit neighborhood.

DETROIT (FOX 2) - For perspective, Jessica Dupnack is 5 feet tall – and this stack of trash is much taller than her and wider. Neighbors say it’s been sitting here for a week and a half in front of a vacant house in an east-side Detroit neighborhood.

"The smell when it gets hot you don’t want to deal with it," an angry neighbor said.

The trash heap is collecting flies and frustrations.

"I know there is probably a lot of feces, it stunk real bad," the neighbor said. "I don’t know what they found when they cleaned (the house) out."

The guts of the house off Coram Street is owned by "Bonjour Detroit LLC"  which has been ticketed for blight issues three times by the city of Detroit in January at the same property.

"It is unsanitary, period," he said. "And it is unacceptable."

The neighbor - who didn’t want to share his identity, says the contractors who did the cleaning, told him "don’t worry, we’ll take care of it."

"I thought it was a dumpster coming then no one ever came," he said.

"You wouldn't see it out in the suburbs so we can’t accept it here," said Jessica Parker, Detroit chief enforcement building department.

Jessica Parker says the LLC accepted responsibility for the earlier tickets and paid them last month. Now, they will be cited again.

"We don’t want to have any neighbor looking at trash on the site," she said. "It is unacceptable."

Within the next week or so – if Bonjour Detroit LLC hasn’t handled it, the city will.

"We don’t want to see the blight, so if we have to step in and do it, it will be at the cost of the owner," Parker said.

Neighbors welcome the investment – but say don’t make it worse. 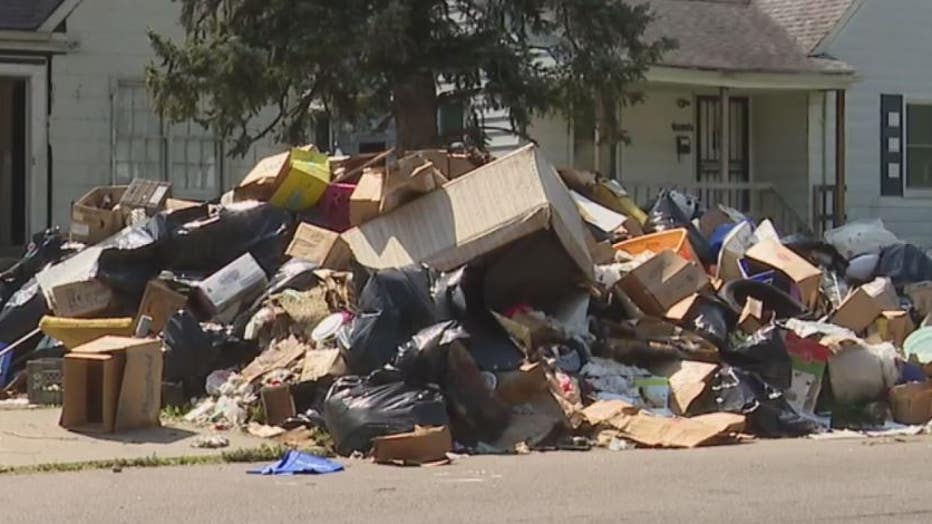 "I believe they’re going to fix it up but in what amount of time?" the resident said. "This should have been done ASAP."

FOX 2 tried to track down Bonjour Detroit LLC which is run out of France. The licensing company they are linked to hung up on us once. Then in another call said – nothing.