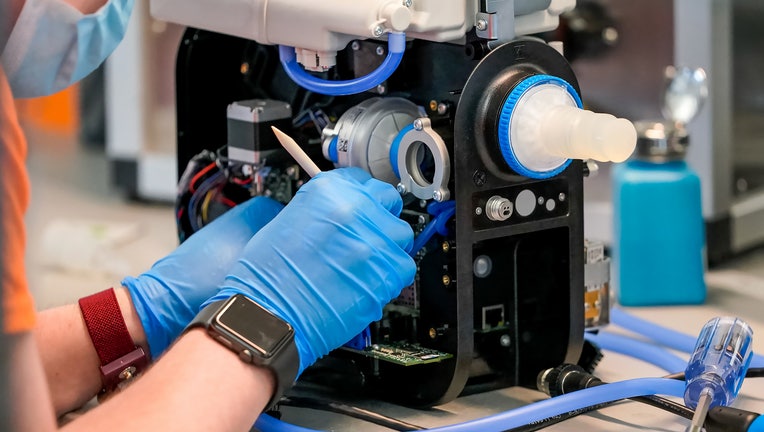 General Motors and Ventec Life Systems team members sign the boxes before delivering the final group of V+Pro critical care ventilators to complete the 30,000-unit order for the U.S. Department of Health and Human Services - to help fight the COVID-1

(FOX 2) - Both Ford Motor Company and General Motors are no longer producing ventilators for the United States, as both have fulfilled their contracts.

Ford says it shipped the last of its 50,000 ventilators to the U.S. Department of Health and Human Services on Friday. GM says it delivered its 30,000th ventilator to the USDHHS on Monday.

The Department of Health and Human Services contracted with GM to build the ventilators at a converted auto electronics plant in Kokomo, Indiana, at a cost of $489.4 million.

The machines were designed by Ventec Life Systems of the Seattle area, and GM ramped up production in about a month when it appeared the U.S. and other countries would run short of ventilators. The ventilators were to be finished by Monday.

GM said Tuesday it has turned over control of the Kokomo operation to Ventec, which will continue to make ventilators there and in Bothell, Washington.

Last week Ford announced it has finished making the 50,000 ventilators for the government at a cost of $336 million. A portion of a factory near Detroit was converted to make the machines. It will now go back to producing auto parts.

When the public school contribution is complete, GM will have donated more than 6 million face masks produced at its Warren, Michigan facility.