PLYMOUTH, Mich. (FOX 2) - A Detroit man, once a boxer and Golden Gloves champ, has deep roots in the Motor City and celebrated his 100th birthday on Tuesday.

Thomas Waling is a walking history lesson and, on Tuesday - his 100th birthday - he took us on a trip down memory lane.

Thomas Waling was a Golen Gloves Champ, worked on the Manhattan Project, and has been married to his wife for 78 years.

"People from Michigan that worked on the bomb - on the Manhattan project," Tom said while showing us a picture of himself with that team.

That's right. Besides turning 100 and being a former Golden Gloves champion, he also spent some time making some of the world's first nuclear weapons.

"They were looking for engineers to go to Los Alamos, so I volunteered to go up there and work on the bomb," he said.

Before that, he was a boxer where he trained with his brothers under their father, Jack, who also trained someone else well known in Detroit.

So the man who trained Joe Louis, one of the most famous boxers of all time, was Tom's father.

Thomas also had a nice run in the ring as well, he was a Golden Gloves champion in 1938 when he was just 112 pounds.

Today, he's still got the robe, which he can wear, and he's got the winning boxing stance. 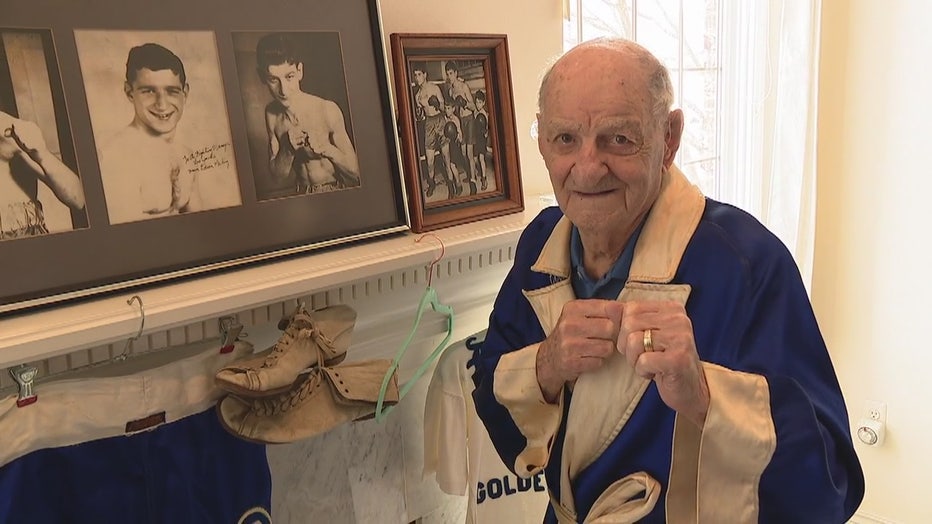 Tom has led quite the life. He was born to Maltese immigrants in Hamtramck, raised in Highland Park, and was president of his class at the Henry Ford Trade School before eventually co-owning the Waling Tool Company. With so much in between.

"I think all told, we've got about 36 between all of them," Mary said.

Their family considers themselves blessed to still have Mary and Tom in their lives.

"Not everybody gets to say 'hey my grandparents are still around and one of them is turning 100 today'. That just doesn't happen to most people," their grandson, Tom Jawor, said.

How do they do it? Luck may factor in but they're also generous with their time, love, and advice to live a long and full life.

"Everyone has their ups and downs, and they have happiness, they have sorrow. But I think, be considerate of others and giving a helping hand when people need it. That's very important," Mary said.

"Take it a day at a time. Live a good clean life," Tom said.