Michigan Governor Gretchen Whitmer and Oakland County Executive Dave Coulter stopped by the memorial to the victims of the Oxford High School shooting on Thursday to leave flowers in their memory.

OXFORD, Mich. - The Michigan governor and Oakland County executive paid visits to the victims of a Michigan high school shooting that took place this week, extending condolences to those still in the hospital.

Both Gretchen Whitmer and Dave Coulter could be seen embracing each other at the memorial Thursday morning before laying flowers at its base. The memorial has continued to grow since the tragedy on Nov. 30.

Flowers, candles, Teddy bears, and balloons now decorate it on all sides.

RELATED: The latest on the Oxford school shooting 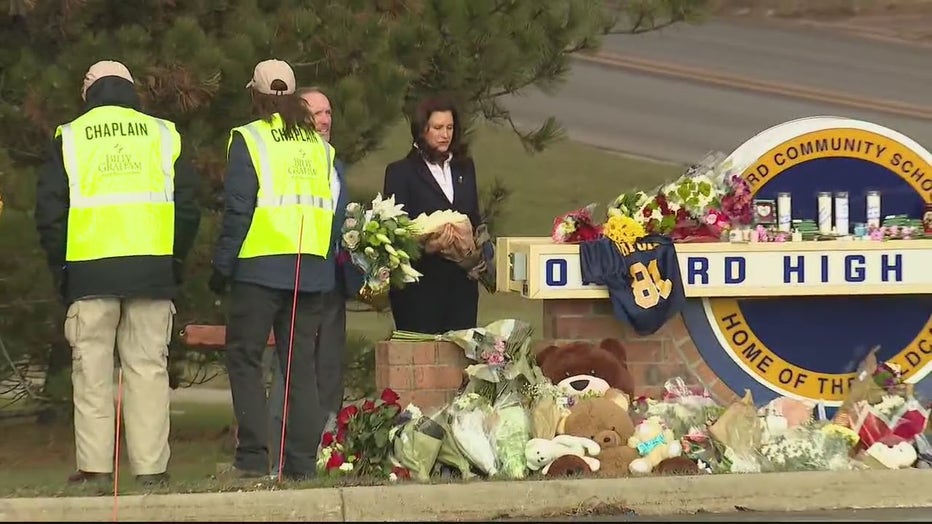 According to members of the governor's team, Whitmer also spoke with school leaders before she and Coulter dropped off flowers at the memorial.

Whitmer previously spoke alongside Oakland County sheriff deputies at a press conference following the shooting. She called gun violence a public health crisis and added that no one should be afraid to go to school, work, or a house of worship.

"My heart breaks for the students, teachers, staff, and families of Oxford High School," said Whitmer on Tuesday, her voice occasionally breaking.